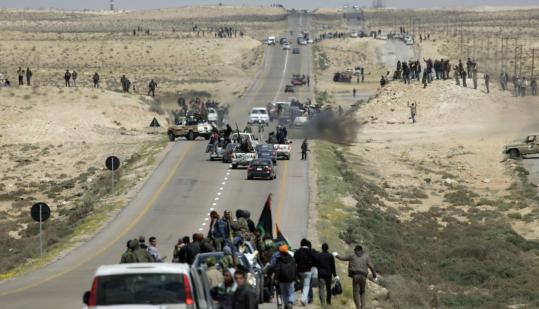 Libya’s foreign minister, Moussa Koussa, was providing information to British investigators yesterday even though he was not granted immunity from prosecution, officials said. He had flown to London on a private jet Wednesday.

His defection, military analysts say, could be a coup for the countries allied against Khadafy.

“It tells a compelling story of the desperation and the fear right at the heart of the crumbling and rotten Khadafy regime,’’ said Prime Minister David Cameron of Britain.

The Obama administration called the departure a significant blow.

In another sign that the cracks in the Libyan government might be widening, a second top official, Ali Abdussalam el-Treki, defected yesterday in Egypt. In decades of service, Treki had served as a foreign minister and as ambassador to the United Nations, where he was president of the General Assembly.

Other than Khadafy’s sons, the only other official as close to the Libyan leader as Koussa is Adbdullah al-Sanusi, his brother-in-law and a top security adviser. Like the Khadafy family, his whereabouts were unknown, but there were no credible reports that he had fled.

“Khadafy must be asking himself who will be the next to go,’’ Britain’s foreign secretary, William Hague, said.

Koussa was considered a pillar of the Khadafy government since the early days of the 1969 revolution. He has been listed by the prosecutor of the International Criminal Court among those who “commanded and had control’’ over Libyan security forces suspected of “crimes against humanity.’’

Hague said Koussa had fled to London “of his own free will’’ and no immunity would be provided.

The prosecutor of the International Criminal Court, Luis Moreno-Ocampo, said last month that he would investigate “alleged crimes against humanity committed in Libya since 15 February, as peaceful demonstrators were attacked by security forces.’’ He had placed Koussa second after Khadafy on a list of “some individuals with formal or de facto authority, who commanded and had control over the forces that allegedly committed the crimes.’’

In Washington, Obama administration officials embraced the defection as a sign of wavering support for Khadafy.

“It is an indication that some of the efforts that we’re making to try to put pressure on the regime can be successful,’’ Deputy Secretary of State James B. Steinberg said on Capitol Hill. “As I think while we should not overstate the significance of this, we should also not understate the fact that somebody who has such a long association with the regime has seen that there’s no future there.’’

“I don’t think his sick leave included London,’’ Ibrahim said wryly, adding: “This is not like a happy piece of news, is it?’’

Koussa served as head of external intelligence in the 1980s, when Khadafy drew US and Western condemnation for attacks like the 1988 bombing of an American passenger plane over Lockerbie, Scotland. The bombing killed 270 people, most of them Americans. In the past, US officials have said they suspect Koussa of responsibility for arranging the attacks.

Scottish prosecutors confirmed they hope Koussa can shed light on the bombing.

The only person convicted in the attack, Abdel Basset Ali al-Megrahi, a former Libyan intelligence operative, was released on compassionate grounds in 2009 while serving a life sentence in Scotland after doctors said he had terminal cancer.

But for those who have long insisted that responsibility for the Lockerbie bombing reached far higher than Megrahi, Koussa’s knowledge could yield invaluable insights, British analysts said.

What is unclear is whether his defection will lead to others.

“We think he could be the beginning of a stream of Libyans who think sticking with Khadafy is a losing game,’’ one senior US official said. “But we don’t know.’’

In Libya, the government advance on Wednesday appeared to return control of the east’s most important oil regions to Khadafy’s forces, giving the isolated government, at least for the day, the region’s most valuable economic prize.

Material from The New York Times and Associated Press was included in this report.

Big Picture: The
Faces of the displaced