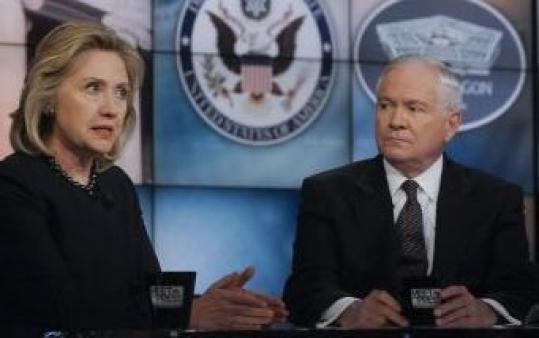 WASHINGTON — In a sign of US confidence that the weeklong assault on Libya has tamed Moammar Khadafy’s air defenses, the Pentagon has reduced the amount of naval firepower arrayed against him, officials said yesterday.

The move, not yet publicly announced, reinforces the White House message of a diminishing US role. That shift will be central in President Obama’s national address on Libya, scheduled for 7:30 tonight.

Defense Secretary Robert Gates and Secretary of State Hillary Rodham Clinton appeared on three Sunday news shows to promote the administration’s case ahead of the speech.

At least one of the five Navy ships and submarines that have launched dozens of Tomahawk cruise missiles at Libyan targets from positions in the Mediterranean Sea has left the area, three defense officials said. They spoke on condition of anonymity in order to discuss sensitive military movements.

The shrinking of the naval presence adds substance to Obama’s expected reassurance to the American people that the United States is now handing off to partner countries in Europe and elsewhere the bulk of the responsibility for suppressing Khadafy’s forces.

Obama administration officials claimed progress in Libya, but lawmakers in both parties voiced skepticism over the mission’s length, scope, and cost.

Obama is trying to address those issues in a speech that is expected to provide his fullest explanation of the US role in Libya and what lies ahead.

Among other questions for Obama is whether the Libyan intervention should serve as a model for US policy toward other Arab countries where revolts against authoritarian governments are gaining ground.