Analysts warn air strikes on ground forces will be dangerous 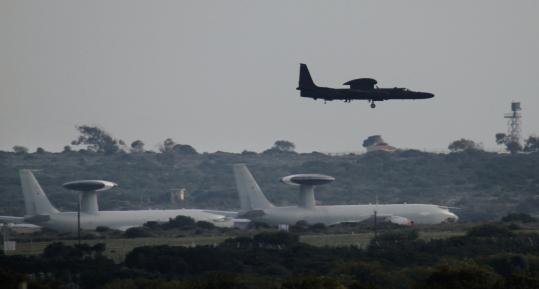 British AWACS aircraft were stationed at Akrotiri, a military base near Limassol, Cyprus, yesterday. Britian will also use Typhoon and Tornado fighters to enforce a Libyan no fly zone. (Petros Karadjias/Associated Press)
By Slobodan Lekic Associated Press / March 19, 2011

BRUSSELS — An allied effort to implement a no-fly zone over Libya will almost certainly establish quick superiority over Moammar Khadafy’s outdated air force. But diplomats and analysts — relying on lessons learned from NATO’s intervention in the Balkans in the 1990s — caution that any attempts to launch air strikes against ground forces would be far more dangerous and could result in serious losses.

NATO’s leaders met yesterday to work out the details of a flight ban over Libya, after the UN Security Council gave the international community a surprisingly broad mandate to protect civilians under attack by government forces.

Alliance military planners said they could deploy dozens of fighter-bombers, tankers, air surveillance aircraft, and drones to a string of air bases along Europe’s southern perimeter. They would serve as launching points for patrols over Libya. Officials said an “execute order’’ could launch the operation as early as this weekend.

NATO has significant experience in such operations — its warplanes successfully enforced no-fly zones over Bosnia in the early 1990s and over Kosovo in 1999 in an effort to end crackdowns by Serb forces on civilians.

Still, Germany and some other member nations have expressed reservations about the operation, warning that it could become a complex and long-term commitment. A plan to launch possible airstrikes against Khadafy’s air defenses was thrown into doubt by Libya’s surprise announcement that it was declaring an immediate cease-fire, diplomats said.

When asked whether the North Atlantic Council — NATO’s top decision-making body — had considered the possibility of air strikes against Libyan air defense and other ground targets during its meeting, Martin Povejsil, the Czech Republic’s envoy to the alliance, replied: “We only discussed enforcing the no-fly zone and the arms embargo, and providing humanitarian assistance.’’

If Khadafy’s war planes were to flout the UN flight ban, analysts say, they would almost certainly be shot to pieces. Since the 1980s, chaotic purchases of equipment, poor maintenance, and inadequate training have shrunk his fleet of more than 400 fighter-bombers, light attack jets, and helicopter gunships to a few dozen aircraft.

What remains are mostly Sukhoi Su-22 and Mig-23 fighter bombers, as well as Yugoslav-made Jastreb light strike jets dating from the late 1960s — several of which have already been destroyed by insurgents, or flown out of the country by defecting pilots.

Outside of its fighter craft, the regime has a handful of operational interceptors, such as the MiG-21 and MiG-25, also dating from the 1960s. Its long-range air defenses are in a similar state, relying on 200 missile launchers long considered obsolete.

A recent report by the Washington-based Center for Strategic and International Studies said the air force has also had major pilot training problems and lost a number of its aircraft to accidents and other attrition.

“Libya seems to have had a serious shortage of even mediocre combat pilots,’’ it stated.

What worries NATO planners, however, are Libya’s plentiful antiaircraft guns and light, short-range shoulder-launched missiles — systems which proved very effective against NATO aircraft during the Kosovo war, said a diplomat who asked not to be identified.

These include about 500 cannons of various calibers, which could prevent allied aircraft from descending lower than 15,000 feet, said the diplomat who asked not to be named because he was not authorized to speak to the media. In Kosovo, a majority of bombing missions had to be carried out from higher altitudes beyond the reach of the Serbian guns.

Other problems may come from Khadafy’s several dozen Mil Mi-17 helicopters and Mi-24 gunships. As experiences in Bosnia have shown it’s very difficult for fast and high flying jets to intercept ground-hugging helicopters.

Analysts have cautioned, however, that it is difficult to give an exact assessment of the African nation’s military abilities, particularly after the defections that saw some troops taking not just aircraft but also weapons with them.

In contrast, NATO planners say the international community has 200 to 300 modern jets that could be quickly deployed to Libya from bases stretching from Gibraltar to Greece, and from US and French carriers in the Mediterranean Sea.

These would include top-of-the-line Eurofighter Typhoons, used by British, Italian, and Spanish air forces. Also available are the formidable French Dassault Rafale fighters and the F-18 Super Hornet, the backbone of US naval air power.

The United States also has a number of ships and other military assets in the region.

They include the nuclear-powered submarine USS Providence, which is equipped with tomahawk missiles; the amphibious landing dock USS Ponce, and amphibious assault ship USS Kearsarge with a contingent of 400 Marines and dozens of helicopters. It also has the command ship USS Mount Whitney and destroyers USS Mason, USS Barry, and USS Stout.