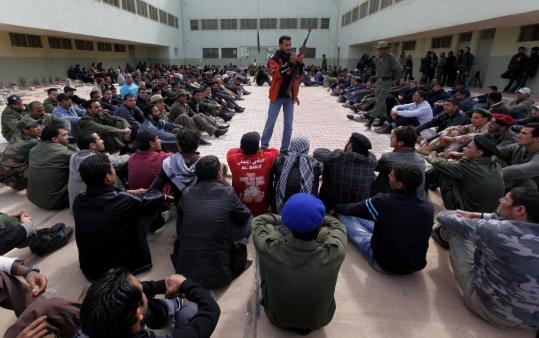 A former Libyan Army soldier showed rebel recruits how to use an AK-47 during training yesterday at a base in Benghazi. (Hussein Malla/Associated Press)
By David D. Kirkpatrick New York Times / March 4, 2011

TRIPOLI, Libya — A state of terror has seized two working-class neighborhoods here that just a week ago exploded in revolt, with residents reporting constant surveillance, searches of cars and even cellphones by militiamen with Kalashnikovs at block-by-block checkpoints, and a rash of disappearances of those involved in last week’s protest.

As rebel fighters in the country’s east celebrated their defeat of a Wednesday raid by hundreds of Colonel Moammar Khadafy’s loyalists in the strategic oil town of Brega, many people in Tripoli said they had lost hope that peaceful protests might push the Libyan leader from power the way street demonstrations had toppled strongmen in neighboring Egypt and Tunisia.

The climate of fear suggests just how effectively the government’s ruthless application of force in Tripoli has locked down the city and suppressed rage, even as rebels have held control of the eastern half of the country and a string of smaller western cities surrounding the capital.

“I think the people know that if they make any protest now they will be killed, so all the people in Tripoli are waiting for someone to help them,’’ one resident said.

Several people in the two neighborhoods, Feshloom and Tajura, speaking on condition of anonymity for fear of Khadafy’s secret police, said militias loyal to the colonel were using photos taken at last week’s protest to track down the men involved.

“They know that there are people who have energy and who are willing to die, so they pick them up,’’ another resident said.

In both neighborhoods, residents say disappearances have continued all week as the security forces appear to be rounding up suspected protesters in anticipation of Friday prayer services, the customary gathering time for protests across the Arab world.

On Wednesday night, a resident of Tajura called a journalist to report that five people had been arrested leaving a mosque Saturday, including Mohammed Safi, director of mechanical engineering at a university here.

“Every day they take people away,’’ the resident said. “We would like to know where they are, what happened to them?’’

Another resident reached by phone yesterday said the police had broken down a door to arrest a relative the night before.

“They tried to frighten his mother and sister,’’ the resident said. “We don’t know where they have taken him.’’

As Khadafy tightened his grip on Tripoli, there were indications that the conflict was settling into a stalemate.

Flush with their victory in Brega, rebel fighters pushed 25 miles to the west and established a makeshift checkpoint. A dozen lightly armed men stood guard, greeting trucks filled with Egyptian migrant workers fleeing eastward toward home. At rebel checkpoints in the east and at the Tunisian border, many of the refugees have said that Khadafy’s soldiers had robbed them, taking their phones and money.

Yet witnesses reported that Libyan air force planes had conducted bombing raids near the front, and in a British television interview one of Khadafy’s sons, Seif al-Islam, appeared to confirm reports of bombing near Brega, saying that the bombs were meant “to frighten them to go away, not to kill them.’’

President Obama issued his strongest call yet for Khadafy to step down yesterday, saying he had lost all his legitimacy as a leader and that “the entire world continues to be outraged by the appalling violence against the Libyan people.’’

Responding to the mounting international pressure, a panel of Libyan government officials told journalists that their security forces had acted with admirable restraint in the face of an insurrection that, they said, was violent from the start. They provided a long list of police headquarters and other government buildings that had been burned by protesters last week. And they presented the government’s first official death toll since the uprising began last month: 374, far below most estimates by foreign governments or human rights groups.

The officials faulted the UN Security Council, saying it had not investigated thoroughly before referring Libyan leaders to the International Criminal Court and freezing the Khadafy family’s assets. And they announced with great fanfare that they had seized what they said was an illegal shipment of painkillers, evidence, they said, that supported Khadafy’s contention that Al Qaeda had drugged Libyans to incite them to revolt.

In Feshloom and Tajura, residents derided such theories, just as they scorned the government’s assertions that its officers had never fired on protesters or violated human rights.

Others described a growing sense of fatalism. One young man in a cafe said he pinned his hopes on a palace coup.

“The people around Khadafy — that is our only hope,’’ he said.