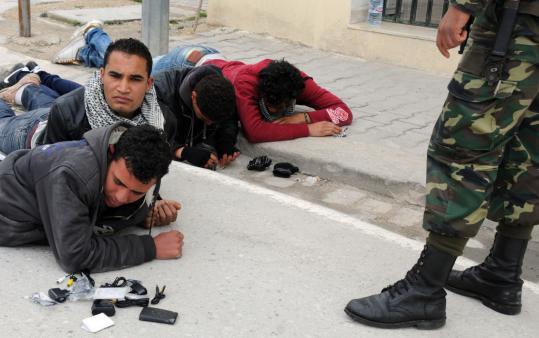 The changes occurred amid a groundswell of new unrest in this North African country, which has been unsettled since the ouster of its longtime autocratic leader and formation of a caretaker government.

Beji Caid-Essebsi will replace Mohammed Ghannouchi, who resigned as prime minister after becoming a major irritant to Tunisians behind the so-called “Jasmine Revolution’’ that toppled President Zine El Abidine Ben Ali last month and sparked a wave of upheaval in the Arab world.

As Ben Ali’s prime minister for 11 years, Ghannouchi became the emblem of an entrenched old guard that many Tunisians feared were hijacking their revolution.

It was not immediately clear how much the shake-up would mollify the protesters in Tunisia, at a time when the country’s leaders are attempting to rebuild its tourism industry and cope with an influx of Tunisians and others fleeing from violence in neighboring Libya.

The change in the government’s leadership followed renewed street protests. Officials said at least five people have died in violent demonstrations since Friday.

Ghannouchi had previously vowed to stay on to guide Tunisia until elections could be organized this summer.

As he stepped down, Ghannouchi sought to take the high ground.

“This [resignation] is not a flight from my responsibilities, but to open the way for another prime minister who — I hope — will have more margin for action than I have had, to give hope to the Tunisian people,’’ he said.

“I am not ready to be the man of repression, and I will never be,’’ Ghannouchi said, warning that unspecified forces appeared to be swelling to try to quash the move toward democracy. “My resignation will provide a better atmosphere for the new era,’’ he said.

Caid-Essebsi is an elderly statesman and lawyer who served in government posts under the Tunisia’s two longtime leaders since it gained independence from France in 1956: Habib Bourguiba and Ben Ali. He was foreign minister under Bourguiba from 1981 to 1986.

Ben Ali was driven from power on Jan. 14 and fled to Saudi Arabia after weeks of a deadly popular uprising that has fanned similar upheaval across the Arab world.

The interim government said it would move the country toward democracy, but it has set no timetable for elections or adoption of a new constitution.

Some Tunisians believe that Ben Ali loyalists in the country have sought to sow discord and discredit the movement that brought the former authoritarian leader down.

The Interior Ministry, in a statement on Saturday, blamed “provocateurs’’ for fomenting violence in otherwise peaceful rallies and for allegedly using young people as human shields in renewed demonstrations.

On Saturday, police and troops backed by tanks used tear gas to disperse hundreds of youths protesting against the interim government. Officers were seen chasing some youths through town after the rally ended.