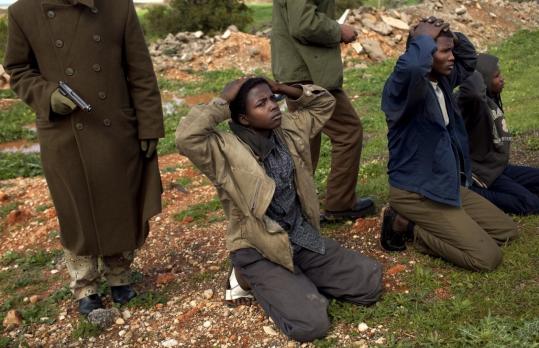 ZAWIYA, Libya — The Libyan rebels challenging Moammar Khadafy demonstrated their increasing military coordination and firepower yesterday, as defecting officers in the east took steps to establish a unified command while their followers in this rebel-held city, just outside the capital, displayed tanks, Kalashnikovs, and antiaircraft guns.

In a further sign of their strength, the rebels also began making plans to tap revenue from the vast Libyan oil resources now under their control — estimated by some oil company officials to be 80 percent of the country’s total.

And in recognition of the insurrection’s growing power, the foreign minister of Italy suspended a nonaggression treaty with Libya on the grounds that the Libyan state “no longer exists,’’ and Secretary of State Hillary Rodham Clinton said the United States was reaching out to the rebels to “offer any kind of assistance.’’

But the most striking display of strength came here, just 30 miles from Khadafy’s Tripoli redoubt. Zawiya is one of several cities near the capital controlled by rebels, who have repulsed repeated attempts by Khadafy’s forces to retake them. The arsenal they showed in Zawiya was far more lethal than previously seen.

“Army, army, army!’’ excited residents shouted, pointing to a defected soldier standing sentry at Zawiya’s entrance as he raised his machine gun in the air and raised two fingers for victory.

A few yards away, a captured antiaircraft gun fired several deafening salutes into the air, and gleeful residents invited newcomers to clamber aboard one of several army tanks now in rebel hands.

Residents said that when Khadafy’s forces mounted a deadly assault to retake the city last Thursday — shell holes were visible in the central mosque and ammunition littered the central square — local army units had switched sides to join the rebels. About 2,000 police officers had done the same the week before.

The opposition’s display came as a global effort to isolate Khadafy and possibly force his resignation gained momentum over the weekend, with the United Nations Security Council moving to impose punitive financial sanctions and NATO allies discussing steps that included a possible no-fly zone over Libya.

But with their increasingly brazen show of firepower, the rebels appeared more willing to engage Khadafy’s forces militarily and break the pattern of nonviolent revolts set by neighboring Egypt and Tunisia and now sweeping the Middle East — just as Khadafy has shown a willingness to shed far more of his citizens’ blood than any of the region’s other autocrats.

The maneuverings by both sides suggested they are girding for a confrontation that could influence the shape of the other protest movements and the responses of rulers around the Arab world who feel threatened by insurrection movements.

Khadafy’s militias, plainclothes police, and other paramilitary forces have so far kept the deserted streets of the capital, Tripoli, under a tight lockdown. And residents of Zawiya said yesterday that his forces were massing again on its outskirts.

In interviews with ABC News, two of Khadafy’s sons appeared to mix defiance and denial. “The people — everybody wants more,’’ said Saadi Khadafy, apparently dismissing the public outcry for a more accountable government. “There is no limit. You give this, then you get asked for that, you know?’’

He described the uprisings around the region as “an earthquake’’ and predicted that “chaos will be everywhere.’’ If his father left, he said, Libya would face a civil war “one hour later.’’

His brother Saif al-Islam Khadafy seemed to challenge journalists to look for signs of unrest. “Please, take your cameras tomorrow morning, even tonight,’’ he said. “Everything is calm. Everything is peaceful.’’

But when government-paid drivers and minders took visiting journalists on an official tour here yesterday morning they found a town firmly in rebel hands, where Libyan officials and military units did not even attempt to enter.

It was the second consecutive day that an official tour appeared to do more to discredit than bolster the government’s line, and questions arose about the true allegiance of the official tour “minders,’’ who appeared to mingle easily with people of rebel-held Zawiya.

Others suggested that the Khadafy government might in fact have believed its own propaganda: that the journalists would discover that Zawiya had fallen into the hands of radical Islamists or young people crazed by drugs procured by Osama Bin Laden.

Several residents of Zawiya said that on Thursday morning the Khadafy forces had blasted peaceful protesters gathered in the square with machine guns and artillery, pointing to holes in the sides of pillars and even a mosque. They showed journalists seven fresh graves dug in the square to bury those killed in the fight, and said at least two others were buried with their families.

But the battle had made them even more confident of their power, they said, because military units had joined their cause instead of fighting against them. Some said that in the fights against Italian occupation and other battles in Libya’s pre-Khadafy history, their city had earned the nickname “the silent lion,’’ and was living up to it again. “When Khadafy killed people, Zawiya became like a volcano,’’ said Tariq Mohamed, a resident.

They said the city was now under the control of a committee of prominent citizens — doctors, lawyers, judges, engineers, and the like —who were organizing its public services and continued defense.

In Benghazi, the eastern city where the revolt began, rebels said that Libyan soldiers had joined the rebels in securing vital oil industry facilities around that part of the country. And some oil industry workers fleeing across the Tunisian border in recent days said they had seen Libyan soldiers fire their weapons to drive off foreign mercenaries or other security forces who had approached oil facilities.

Hassan Bulifa, who sits on the management committee of the Arabian Gulf Oil Company, the country’s largest oil producer, said the rebels control at least 80 percent of the country’s oil assets, and that his company, based in Benghazi, was cooperating with the rebels.

The company resumed oil shipments yesterday, loading two tankers at a port in Tobruk, Bulifa said. The two ships — one bound for Austria and the other for China — can carry 1.7 million barrels of oil and will represent the company’s first shipments since Feb. 10.

Although the revenues from those sales go the company’s umbrella organization, Libya’s National Oil Company, Bulifa said Arabian Gulf Oil Co. had ceased any coordination with the national company, though it was honoring oil contracts. And he insisted the proceeds would ultimately flow to the rebels, not Khadafy.

Despite Clinton’s offer of aid, the rebels still seemed far away from the kind of unity that might allow them to start serious talks with foreign governments or international agencies. Clinton herself said any talk of recognizing a provisional government was premature.

On Saturday, the country’s former justice minister, Mustafa Mohamed Abd al-Jalil, said in an interview on Al Jazeera that he would head a transitional government, with the aim of holding elections within three months. But yesterday, another figure in the rebel movement, Abdel-Hafidh Ghoga, seemed to dismiss that claim, saying a national council had been formed to manage the “day to day living’’ of the “liberated’’ territories.

The Khadafy government implicitly acknowledged for the first time yesterday that it feared elements of its military falling into rebel hands, as Khadafy’s son Saif said in the television interview that the Libyan government had bombed its own ammunitions depots in the east.

The commander of the eastern region’s air defense said that three air bases in the east had defected to the rebel side, along with military police units.