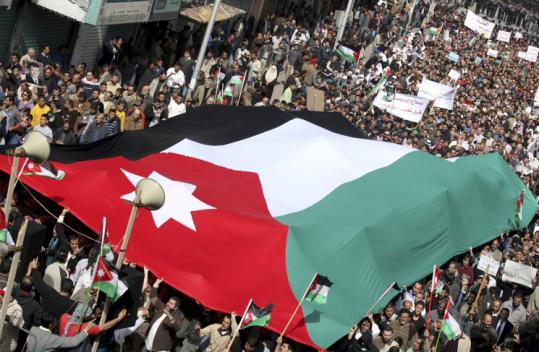 CAIRO — Hundreds of thousands left mosques and staged protests across the Arab world yesterday, some trying to shake off autocratic rulers and others pressuring embattled leaders to carry out sweeping reforms.

Huge crowds turned out in Egypt, Bahrain, Yemen, and Jordan, but with very different goals.

In Egypt, where an 18-day uprising toppled President Hosni Mubarak on Feb. 11, tens of thousands jammed Cairo’s Tahrir Square to keep pressure on military rulers to carry out reforms.

Demonstrators said they are worried the army is not moving quickly enough on reforms, including repealing emergency laws, releasing political prisoners, and removing members of Mubarak’s regime from power.

Thousands chanted that they will not leave until Prime Minister Ahmed Shafiq, one of the Mubarak-era holdovers, is removed from office. Some waved flags of Libya to show support for the uprising next door.

“We made Mubarak step down, and we must make Shafiq also step down,’’ said Safwat Hegazy, a protester from the Muslim Brotherhood, Egypt’s largest opposition group.

Since Mubarak’s fall, military rulers have disbanded both houses of Parliament and promised constitutional reforms that will allow wider participation in elections, to be held within six months. They also promised to repeal emergency laws that give security forces largely unchecked powers, though only when conditions permit — a caveat that worries protesters.

In Bahrain, the first Persian Gulf state to be thrown into turmoil by the Arab world’s wave of change, tens of thousands rallying in the central square demanded sweeping political concessions from the ruling monarch.

Security forces made no attempt to halt the marchers, an apparent sign that Bahrain’s rulers do not want more bloodshed denunciations from their Western allies. In the early stage of the two-week-old rallies, troops had used lethal force.

The unrest is highly significant for Washington. Bahrain is home to the US Navy’s Fifth Fleet, which is the Pentagon’s main counterweight against Iran’s widening military ambitions. Bahrain’s Sunni monarchy, meanwhile, is under pressure from Saudi Arabia and other Gulf rulers not to yield to the Shi’ite-led protesters, fearing it could open footholds for Shi’ite powerhouse Iran.

In the Arab world’s poorest country, Yemen, tens of thousands marching in the capital of Sana demanded that their US-backed president, Ali Abdullah Saleh, step down. It was one of the largest crowds since protests erupted earlier this month.

A Muslim preacher who led yesterday’s prayer told protesters it was their religious duty to topple Saleh, describing him as a “devil who has driven us to the stone ages.’’

Yemen has a weak central government and an active branch of Al Qaeda. Saleh has promised to step down after elections in 2013, but the demonstrators want him out now. Activists have been digging in, setting up encampments in some public areas.

A record crowd turned out yesterday in Jordan, where the country’s largest opposition group, the Muslim Brotherhood, has warned that citizens’ patience is wearing thin with the government’s slow moves toward reform.

Hamza Mansour, a leader of the Muslim Brotherhood, called for quicker steps to give Jordanians a bigger say in politics and to have them elect their prime minister — now selected by King Abdullah II. Mansour spoke to 4,000 Jordanian protesters, the largest crowd to take to the streets of downtown Amman for the pro-reform cause.

The leader of the opposition Islamic Action Front told about 4,000 people gathered yesterday in the capital, Amman, that Jordanians were becoming “impatient with the slow and insufficient steps toward reforms.’’

“Hurry up, hurry up, our government, the clock is ticking and people are eagerly waiting to see real and serious democratic reforms,’’ Hamza Mansour said to loud applause by protesters.