Rebel force unable to take over Tripoli; US moves to freeze Khadafy’s assets 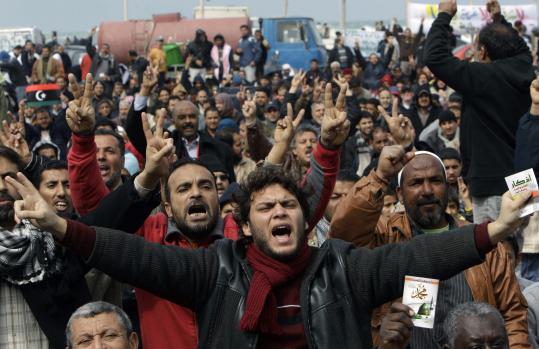 BENGHAZI, Libya — Mercenaries and army forces brutally smothered an attempt by protesters yesterday to break Colonel Moammar Khadafy’s hold on the capital, Tripoli, opening fire on crowds that had taken to the streets after prayers to mount their first major challenge to the government’s crackdown, witnesses said.

It was the fiercest violence yet in the Libyan capital. Gunmen on rooftops and in the streets shot into the crowds with automatic weapons and even an antiaircraft gun, and there were multiple deaths, witnesses told the Associated Press.

The bloodshed heightened a standoff that has pitted Khadafy — who vowed yesterday to turn Libya into “a hell’’ as he hunkered down in his stronghold — against a spreading rebel force and increasingly alarmed the United States and other nations, which condemned the violence and promised sanctions in coming days.

An rebel officer who is coordinating an attack on Tripoli, Colonel Tarek Saad Hussein, asserted in an interview that an armed volunteer force of about 2,000 men — including army defectors — was due to arrive in Tripoli. There was no way to confirm his claim.

He was especially angered at the reports of security forces firing on protesters after prayers.

“They did not have weapons,’’ he said, speaking at an abandoned army base in the eastern city of Benghazi, which is under rebel control. “They shot people outside the mosque.’’

“It was really like we are dogs,’’ one man who was marching from Tripoli’s eastern Tajoura district told the AP. He added that many people were shot in the head, with seven people within 10 yards were cut down in the first wave of gunfire.

As the violence swelled, the international community made several moves to further isolate the leader. Moments after a charter aircraft departed Libya with all the remaining US diplomats, President Obama’s administration shuttered the US Embassy in Tripoli, said it would impose sanctions, and moved to freeze assets in this country belonging to Khadafy, his family, and his inner circle.

White House officials said Obama also canceled all military contacts with Libya and ordered a reallocation of US intelligence assets to focus on civilian deaths there and to track Libyan troop deployments and tank movements.

In addition to the plane carrying embassy personnel, a chartered ferry with hundreds of US citizens finally departed yesterday for Malta. High seas had delayed the departure for two days.

The administration had cited the risk to American lives for what had appeared to be its restrained reaction to events in Libya over the past week, even as evidence of government atrocities grew. But with virtually all Americans and other foreigners now gone, the United States moved quickly to intensify the pressure.

In a chilling briefing to the Security Council, UN Secretary General Ban Ki Moon cited reports that forces loyal to Khadafy were shooting civilians as they left their homes and inside hospitals in Tripoli and said that more than 1,000 people had been killed.

UN officials advanced a process that could lead to a war crimes prosecution.

Accounts of the bloodshed in the streets of Tripoli indicated that Khadafy’s forces had accelerated the same determined brutality as they had earlier in the week defending their leader, who has ruled for more than 40 years.

“They shoot people from the ambulances,’’ one terrified resident, Omar, said by telephone as he recalled an episode during the protests yesterday when one protester was wounded. “We thought they’d take him to the hospital,’’ he said, but the militiamen “shot him dead and left with a squeal.’’

Reports said several people were killed, but a precise toll may be impossible. Omar said that friends who were doctors at a hospital in Tripoli saw bodies being removed from the morgue to conceal the death toll. Local residents told him that the bodies were being taken to beaches and burned. There was no way to confirm the account, and Omar did not want his full named used for fear of his life.

Witnesses in Tripoli said the streets were lined with extra police officers in riot gear before Friday prayer services, and militia members patrolled the area near Bab al-Aziziya, Khadafy’s military base.

Libyan state television also announced that the government would give $400 to every family and raise the salaries of state employees by as much as 150 percent, in what appeared to be an attempt to buy support.

But the gesture was too late to stop more painful defections. Libya’s ambassador to the United Nations, Abdurrahman Shalgham, a longtime friend of Khadafy, denounced him yesterday in New York, comparing him with Pol Pot and Hitler.

Libya’s entire Arab League mission resigned for the same reasons yesterday, as did the country’s mission in Geneva. Ahmed Khadafy al-Dam, one of Khadafy’s top security officials and a cousin, left Wednesday evening, it was revealed, for Egypt, where he denounced Khadafy’s “grave violations to human rights.’’

Condemnation and calls for action mounted from nations abroad, too. Officials in Washington said they had shut the US Embassy in Tripoli and would put together unilateral sanctions even as the UN Security Council worked on measures of its own.

A resident who lives near a home that belongs to Khadafy’s daughter, Ayesha Khadafy, said that in recent days members of the security services guarding the home had fired indiscriminately at people who drove too close, killing four people in two cars.

A potentially large force of armed fighters sympathetic to the protesters was converging on Tripoli, according to military officials and soldiers who defected.

Hussein said the force consisted of active duty and retired soldiers and army reservists who had joined the rebel side. It was sent to the capital in small groups, he said, adding that they carried a mixture of light arms and heavier weapons, including rocket-propelled grenades.

Material from the Washington Post and Associated Press was included in this report.