Eastern Libyans seek to govern themselves, with eye on Tripoli 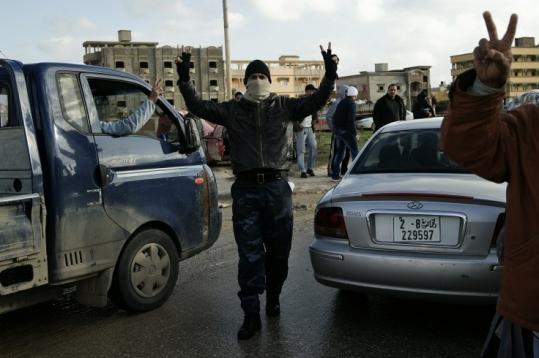 Libyans flashed the victory sign as they celebrated yesterday on the outskirts of Benghazi, the nation’s second-largest city. (Gianluigi Guercia/Afp)
By Paul Schemm Associated Press / February 25, 2011

BENGHAZI, Libya — Libyans in the eastern half of the country find themselves in an unimaginable situation: They are free of Moammar Khadafy’s rule for the first time in more than four decades.

Now citizens are figuring out how to run their own affairs and build up their military, as Khadafy remains very much in power on the other side of the country.

It began as a series of small protests over the imprisonment of a human rights lawyer. Then in a week of increasingly bloody battles, the residents of Libya’s second-largest city, Benghazi, found themselves in charge.

Just days after the last government forces fled, the city appears orderly, with cars stopping at traffic lights, stores open, and a new local government emerging where once all forms of social organizing were ruthlessly suppressed.

“We were not planning to make a revolt; it happened all of a sudden,’’ said Fathi Turbel, the 39-year-old lawyer whose imprisonment sparked the protests. “People can’t imagine how it all could have happened so quickly.’’

Following the example of their Egyptian neighbors, the Libyans quickly formed popular committees to guarantee basic security and began to talk to local academics, lawyers, and others to figure out how to run the city they had inherited.

The result, announced yesterday, was a 15-person city council of prominent figures, including Turbel.

He spoke to the Associated Press in the city’s seaside courthouse, the focal point of last week’s protests. Rallies still sprout up regularly outside as residents celebrate their long-denied right to pile into a square and chant slogans.

Under a 1973 law, it was illegal for four or more people to gather together because of Khadafy’s conspiracy fears. Any type of civil organization was squashed. Now, said Turbel, they have to learn to work together.

Inside the courthouse, it is a hub of activity as earnest young men and women bustle through the corridors putting together a new municipal apparatus.

“We have no experience whatsoever in this, so we resorted to the help of people who may know better than us, and so far, as you can see, it’s working,’’ said Atif el-Hasiya, an engineer now working for the new administration. “We’re actually more organized than we were before.’’

The evidence outside seems to bear out his optimism. Traffic police have returned to the streets, and the only jams are as people slow down to gawk at the burnt-out remains of the symbols of the old regime.

The crackle of gunfire, however, usually from someone firing an assault rifle in celebration, still splits the night and sometimes can be heard during the day. Officials admit a top priority is getting back the many guns that fell into people’s hands after the chaos.

This is one of the main jobs of the new army that is slowly forming from the scattered units in the eastern half of the country that defected to the rebellion rather than shoot protesters.

It is only in recent days that the individual bands have formed an operations room to coordinate their actions, and officers said that so far, no actions against the central government are planned. Instead, they are waiting for the rest of Khadafy’s forces to defect.

“We are hoping for a coup d’etat from the people around him,’’ acknowledged Abu Ahmed, a senior activist involved in organizing the new government. He noted that Libya’s army, even when it was united, was not very strong.

“He pulled all the capabilities out of them. The only capabilities available in Libya were with Khadafy’s [private] security forces,’’ he said, explaining that Khadafy feared military coups and left the army with little in the way of ammunition.

For now, the troops who have defected said they are in contact with their colleagues in the western half of the country in an effort to persuade them change sides as well.

Even amid the euphoria over the city’s liberation, rumors are still rife about impending aerial bombardments, naval assaults, or the reappearance of Khadafy’s dreaded African mercenaries, whom residents say have done much of his fighting.

There are also fears the Libyan leader’s plainclothes agents still lurk among them, waiting for a chance to strike.

‘We are living a real situation in which we should feel paranoid, and we should act paranoid in order to protect ourselves,’’ said Abu Ahmed, who repeatedly ordered the door to his office closed. “We know this place is really infiltrated by the security apparatus of the Gadhafi regime and the revolutionary committees trying to gather as much information as possible,’’ he said.