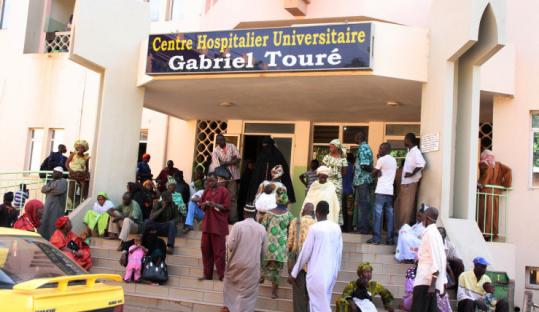 Relatives of victims injured or killed in a stampede waited for news outside a hospital yesterday in Bamako, Mali. (Harouna Traore/Associated Press)
Associated Press / February 23, 2011

BAMAKO, Mali — Anguished families wept at hospitals and morgues yesterday after 36 people were crushed and at least 64 others were injured in a stampede as a crowd tried to leave a stadium following a religious ceremony.

Tens of thousands had gathered to receive blessings from one of Mali’s best-known imams, Osman Madani Haidara, during the Muslim holy period of Maouloud. Witnesses say the stadium had been holding many more than its maximum capacity.

As the participants departed the ceremony Monday night, the crowd surged against a metal barrier, said Sadio Gassame, Mali’s minister of interior security and civil protection.

Families waiting outside Bamako’s Gabriel Toure hospital wept and comforted each other. At the city’s central morgue, Ahmed Dada waited to collect the body of a 25-year-old friend.

“God decides everything,’’ he said. “We all know we are just on the planet for a short time.’’

At the place where people had been crushed, security personnel were collecting piles of shoes to put into a waiting van late Monday. A young girl sat on a bucket at the edge of the scene, crying. She had lost both parents and didn’t know her way home.