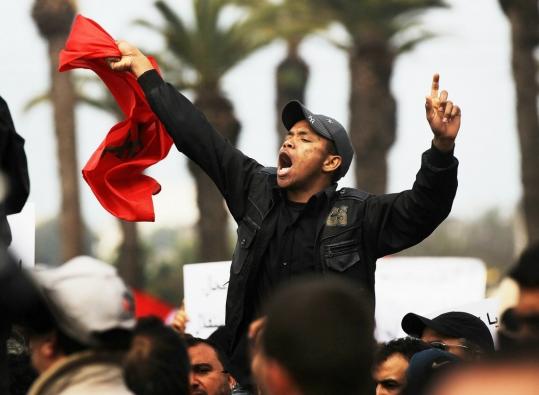 RABAT, Morocco — Thousands of people marched in cities across Morocco yesterday as the North African kingdom entered the wave of Arab world upheaval.

During a march on Hassan II Avenue in the capital, Rabat, demonstrators demanded a new constitution to bring more democracy to the country. They shouted slogans calling for economic opportunity, education reform, better health services, and help in coping with the rising cost of living.

The Associated Press estimated the turnout in Rabat at 4,000. Organizers put the crowd outside Parliament at 20,000.

The main target of yesterday’s rallies was Parliament, where many Moroccans say their voices are not heard. Still, the protests are likely to pressure King Mohammed VI, who has been seen as a reformer compared with his father, Hassan II, but who still holds absolute authority.

Scattered violence broke out in some parts of the country. Stone-throwing youths clashed with police near the ochre-colored walls of Marrakech, where mobs torched several parked cars. In Casablanca, a sea of white banners covered the rain-splattered Mohammed V square, where young men in baseball caps and hoods joined women in Islamic headscarves in the diverse crowd.

Morocco, like Tunisia and Egypt, is a strong Western ally. Anger over rising prices and corruption hasn’t so far appeared to dent the loyalty many Moroccans feel toward the king.

Tunisia Tunisia’s government asked Saudi Arabia yesterday whether its exiled former president, Zine El Abidine Ben Ali, is dead and called for his extradition if he is still alive, as thousands of people protested in the capital, demanding that the caretaker government resign.

The 74-year-old Ben Ali fled to Saudi Arabia on Jan. 14, after a massive popular uprising that ended his 23-year rule and prompted a wave of protest against other autocratic leaders across the Arab world.

Tunisia’s Foreign Ministry said it had asked Saudi Arabia to provide information “as soon as possible’’ on whether the ousted president’s health has deteriorated or on “the possibility of his death’’ in the wake of news reports on the matter in recent days.

The statement, reported by the official news agency TAP, also asked Saudi Arabia to extradite Ben Ali after new charges against him. Those charges included an alleged role that Ben Ali played in “the commissioning of and incitement to murder,’’ TAP said. A United Nations mission has said at least 219 people were killed in the weeks of unrest.

Investigators also are looking into allegations that Ben Ali and his family held bank accounts and real estate in several countries to launder money obtained illegally.

Yemen Yemen’s embattled president yesterday sought a way out of the political crisis gripping his impoverished Arab nation, offering to oversee a dialogue between the ruling party and the opposition to defuse the standoff with protesters demanding his ouster.

The offer by the US-backed Ali Abdullah Saleh — which opposition groups swiftly rejected — came as protests calling for his ouster continued in at least four cities around the country for the 11th straight day.

A 17-year-old demonstrator was killed yesterday evening in the port city of Aden when the army opened fire to disperse a march there, bringing the death toll to nine since the protests began. About 3,000 university students marched in Sana, the Yemeni capital. Demonstrations were also held in the town of Taiz and in the province of al-Hadida.

Saleh has already made a series of concessions, pledging that his son would not succeed him and that he would not seek another term in office. Yesterday, he repeated his offer for negotiations.

Yemen is strategically located at the mouth of the Red Sea and next door to the world’s largest oil reserves. The United States is most worried about an Al Qaeda offshoot that has taken root in Yemen’s mountains.

Faezeh Hashemi, who has appeared at protests in the past, was detained yesterday while chanting antigovernment slogans in one of the main streets of Tehran, the IRNA news agency said.

Iran’s opposition had called for rallies yesterday to mark a week since the deaths of two people in Feb. 14 clashes between security forces and opposition protesters in Tehran.

The International Campaign for Human Rights in Iran said large numbers of protesters had turned out on major streets in the capital and four other cities yesterday. It said security forces in Tehran dispersed the crowds with gunfire and tear gas, and one person is believed to have been killed in the capital.

Last week’s rally was called by opposition leaders Mir Hossein Mousavi and Mahdi Karroubi in solidarity with the Egyptian uprising.

China Chinese authorities wary of any domestic dissent staged a show of force yesterday to squelch a mysterious “Jasmine Revolution,’’ breaking up several protests modeled on the prodemocracy demonstrations sweeping the Middle East.

Authorities detained activists, increased the number of police on the streets, disconnected some cellphone text-messaging services, and censored Internet postings about the call to stage protests in Beijing, Shanghai, and 11 other major cities.

Police took at least three people away in Beijing. In Shanghai, police led away three people near the planned protest spot there.

The campaign was announced Saturday on the US-based Chinese-language news website Boxun.com. The unsigned notice called for a “Jasmine Revolution’’ — the name given to the Tunisian protest movement — and urged participants to the need for food, work, housing, and human rights.

China’s authoritarian government has appeared unnerved by protests in the Arab world. It has limited media reports about them, and restricted Internet searches to censor information about Middle Easterners’ grievances against autocratic rulers.