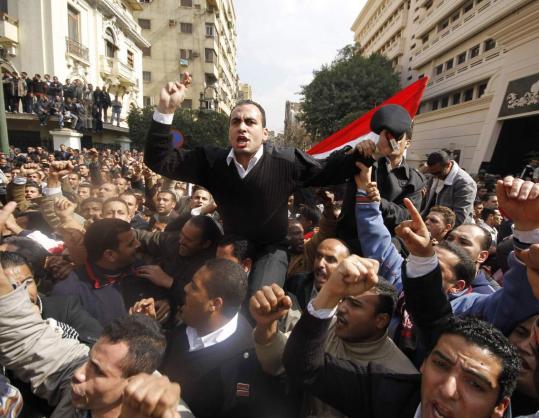 CAIRO — Egypt’s new military rulers tried to contain growing labor unrest yesterday and to reach out to youthful revolutionaries, as the formidable task of governing the politically unstable and impoverished country became apparent.

Police officers, ambulance drivers, bankers, journalists, and archeologists marched through the streets of Cairo in separate protests. Emboldened by a sudden burst of freedom that has flowered since President Hosni Mubarak’s departure on Friday, the demonstrators demanded higher wages and other benefits.

“This is our ideal chance to make our voices heard,’’ said Ahmed Mahmoud, a manager at a state-owned bank. “You would never see these kind of protests before, not when we had a dictator.’’

The Supreme Military Council, which took power after Mubarak’s resignation, responded with a communique in which it urged Egyptians to go back to work, saying the stoppages were harming the country’s security and economy. The council imposed martial law on Sunday, and officials hinted that they would ban strikes if things did not improve.

“Honorable Egyptians regard these demonstrations, which are taking place at a critical moment, as leading to negative consequences,’’ read the communique, the fifth handed down by the military council since last week.

Meanwhile, leaders of the prodemocracy demonstrations that ended Mubarak’s nearly three-decade rule said that they had begun direct talks with the military chiefs for the first time.

The generals said an early priority for the military council is to quickly overhaul Egypt’s constitution, which was designed to stifle political opposition to Mubarak.

The council suspended the constitution Sunday but told the revolutionaries that it would soon appoint a committee of legal specialists to draft amendments within 10 days. The proposal would be subjected to a referendum within two months, according to an account of the meeting posted by Wael Ghonim, a marketing executive and protest leader.

The negotiations between the activists and military leaders, which were described as exploratory, were held Sunday at military intelligence headquarters in Cairo, said Khaled al-Sayed, a protest organizer who attended. Another round is scheduled for tomorrow.

In an interview, Sayed said the generals expressed sympathy toward the demonstrators’ cause and their desire to return to civilian rule as soon as possible. But he said they gave few other specifics. They also refused, for now, demands to release political prisoners and overturn Egypt’s state-of-emergency law, a legal measure Mubarak relied on for three decades to arrest dissidents.

“They told us that they agree with us, but they were reserved when we raised our specific issues,’’ Sayed said. He said he also was skeptical of the generals’ assertion that they would hand over power to a civilian government in less than six months.

Ghonim, one of eight protest organizers at the meeting, said in a Facebook posting that he was more optimistic.

“I felt like we were all one and that we all want what’s best for Egypt,’’ wrote Ghonim, who had been detained by Mubarak’s security forces for 12 days and released last week. “As an individual I feel that Egypt is in honest hands and that we are truly on the right path to achieve democracy.’’

For now, Egypt’s head of state is Field Marshal Mohammed Tantawi, leader of the Supreme Military Council and the defense minister under Mubarak. He has made no public statements since taking over from Mubarak on Friday.

Since then, the military council has been communicating to the public solely via the communiques.

The Obama administration has been in regular contact with Tantawi since the protests erupted Jan. 25 and has praised him for ordering the armed forces to take a neutral role and not crack down on the demonstrators. Defense Secretary Robert Gates spoke by telephone with Tantawi the day after Mubarak’s resignation. It was the sixth conversation between the two men since the protests began.

The military council has said that it will remain in control of Egypt for six months, or until new elections can be held. It has not specified when the elections might occur, leaving the door open to indefinite military rule.

Analysts and diplomats in Cairo, however, said it appears that Tantawi is eager to make changes quickly rather than have the armed forces assume long-term responsibility for running Egypt — and addressing its many social and economic problems.

“My own sense of the field marshal is that he’s not really comfortable being the governor of Egypt,’’ said a Western diplomat, who spoke on the condition of anonymity to avoid antagonizing the military chiefs.

Meanwhile, rumors continued to swirl about the fate of Mubarak, who departed Cairo on Friday on a plane with his wife but has not been seen since.

His vice president, Omar Suleiman, also has disappeared from view since going on state television Friday to announce Mubarak’s abdication. Some Egyptian military officials have told diplomats that Suleiman has formally retired.

Sameh Shoukry, Egypt’s ambassador to the United States, said that he had heard through personal, unofficial channels that Mubarak was “possibly in somewhat of bad health.’’ Shoukry, interviewed on NBC’s “Today’’ show, said he did not have specifics.

Two Cairo newspapers said Mubarak was depressed, refusing to take medication, and repeatedly passing out at his villa. There was no immediate confirmation of the reports. Mubarak had surgery in Germany last year to remove his gallbladder.

Employees of the National Bank of Egypt, the largest government-owned bank, went on strike yesterday, a day after hundreds of them massed outside its headquarters.

The strike there and at other government banks forced the Central Bank to order all banks closed, with today a religious holiday. It also forced Egypt’s stock exchange to delay its reopening until next week at the earliest.

Outside the Nile-side TV and state radio building, hundreds of public transport workers demanded better pay. Several hundred also protested outside the state-run Trade and Workers Federation, demanding the dissolving of its board, which they accuse of corruption.

Hundreds of ambulance drivers seeking higher pay lined up their vehicles on a road along the Nile in the Giza district. Workers at a key Cairo traffic tunnel threatened to shut down the route if their salaries weren’t raised.

© Copyright 2011 Globe Newspaper Company.
Map
Your comment is subject to the rules of our Posting Policy
This comment may appear on your public profile. Public Profile FAQ