Thousands in Cairo reclaim their lives 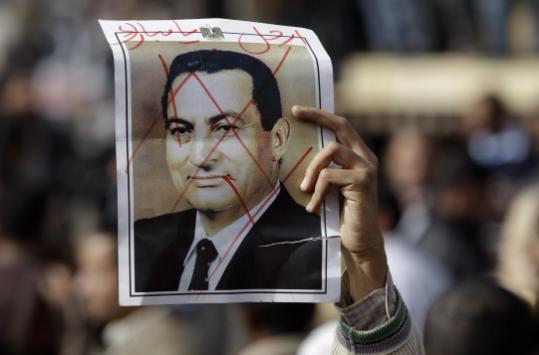 A protester held a defaced poster of President Hosni Mubarak with the words ‘‘Mubarak, get out’’ at a demonstration in Cairo. (Ben Curtis/ Associated Press)
By Anthony Shadid New York Times / January 30, 2011

Shadowed by the landmarks of a government that turned promises of secular nationalism into a withering authoritarianism, thousands of young people did what the state of President Hosni Mubarak never allowed in 29 years. They seized control of their lives.

Through the day, past the smoldering headquarters of Mubarak’s party and beside the travel agents who catered to tourists his government seemed to favor, youths took it upon themselves to organize traffic, snarled by the withdrawal of the despised police from the streets.

Young boys cleaned incinerated refuse from a night of looting that left more than a few ashamed. Others dragged makeshift barricades before the Egyptian museum, the receptacle of a glorious culture whose more modern incarnation has stagnated for decades. A few sweaty young men, fired by the euphoria of what they called a revolutionary moment, even dispensed water to the thirsty.

“This is the people’s water,’’ Mustafa Mohammed shouted, as he filled protesters’ water bottles.

Even in Liberation Square, there was a current of anxiety over what the protests would lead to, and what the arson and looting of a night before portended. There were reports of lawlessness and a pronounced unease in Cairo’s wealthier neighborhoods and across the country. For now, though, fleeting as it may be, an ossified order breathed new life.

The streets of the Egyptian capital have seethed before — over the United States’ war in Iraq and Israel’s occupation of Palestinian lands. But yesterday, America was mentioned more as a symbol of Mubarak’s subservience.

In interviews across Cairo, the rebellion of youth stood as an uprising of the dispossessed, if dispossessed is the word that captures all the petty humiliations, bribes and abbreviated lives once captured in an anthemic song by the Cairene band, Downtown. “I want to marry,’’ it went, “but I’ve got no money.’’

The more sober suggested that the once-omnipotent security forces would crush the uprising. Indeed, the government seemed more intent yesterday on enforcing a curfew. But the forces that have driven a week of unrest suggest a broader reality: A people who once complained of their own quiescence would no longer stay quiet.

“This is our country,’’ said Maram Naji, a 33-year-old wearing a pink veil who returned after working as a psychologist for three years in the Persian Gulf. “We want to stay in our country. We want to share in its wealth, we want to be part of its land. They can only laugh at us so long, make fun of us for so long.’’

The sentiments drew on another moment, where the anger of poor Egyptians clashed with the perquisites of the privileged. Liberation Square took its name after a revolution in 1952 carried out six months to the day after mobs burned Cairo, setting fire to the symbols of colonial rule and status. The Cinema Opera went up in flames as it played “When Worlds Collide.’’

“The biggest mistake Mubarak did was to take this country for granted. How can you take 80 million people for granted?’’ asked Yahya Ismail, an architect. “I hope he leaves, and I hope it doesn’t turn to chaos.’’

“I’m glad people have started to realize what’s going on,’’ said Eid Khaled, who works in a car parts shop in Badrasheen, outside of Cairo, earning a salary so meager he was embarrassed to discuss it, except to say he could not marry anytime soon. “I could take a loan, but I can’t pay it back.’’ His complaint was not just with Mubarak, but all political parties and the retinue of politicians they employ.

Through his reign, Mubarak eschewed the dramatic for the mundane, ever the methodical officer who became a hero after the 1973 war with Israel when he planned Egypt’s air defenses. In the end, though, the country began to reflect his taciturn personality.

Egypt is a far cry today from the country that unquestionably led the Arab world in the 1950s and 1960s, when it radiated culture and power.

“For 30 years, Egypt lost its place,’’ said Ashraf Hamid, 40. “We’ve been ruled by mercenaries and rulers who stole from our treasuries. It’s over now, the people have woken up, and they’re going to rise again.’’

He watched Mohammed dispense the water. “Egypt is going to be the example again.’’ 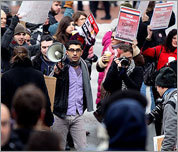