Referendum comes after decades of war 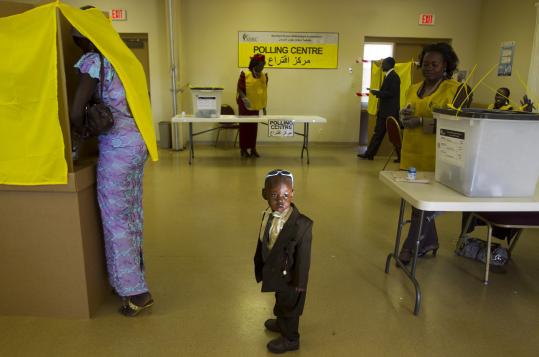 JUBA, Sudan — Starting in the cool hours of the night, long before the polls even opened, people across southern Sudan began lining up at polling stations yesterday to cast their votes in a historic referendum on whether to declare independence. Jubilant crowds made clear which was the overwhelmingly popular choice.

As the sun cleared the horizon and the voting began, the streets of Juba, the capital of southern Sudan, broke into a street party. Women were literally skipping around the polls. Young men thumped on drums. Others were wrapped in flags.

“I feel like I’m going to a new land,’’ beamed Susan Duku, who works for the United Nations.

People were hollering, singing, hugging, kissing, slapping high-fives, and dancing as if they never wanted the day to end, despite the sun beating down and voting lines that snaked for blocks.

Salva Kiir, president of southern Sudan, which has been semiautonomous since a peace treaty was signed in 2005, cast his ballot as the polls opened.

Southern Sudan has suffered a lot, and after years of civil war, oppression, and displacement, many people here saw the vote as an unprecedented chance at self-determination.

Unity was represented on the ballot by a drawing of two clasped hands. Secession was a single open hand. Many people rely on these symbols: More than three-quarters of southern Sudanese adults cannot read.

The independence referendum will continue through Saturday to allow residents of remote areas to vote. The votes are expected to take at least a week to count.

The mainly Christian and animist south is widely expected to approve secession from the mainly Muslim north, splitting Africa’s largest country in two.

The referendum is a result of a conflict that lasted for decades and an American-backed peace treaty in 2005, which granted the south the right to self-determination.

For Duku, the choice was simple.

“Separation,’’ she said. “One hundred percent, plus.’’

Many people here spoke in almost biblical terms about lifting themselves out of bondage.

Sudan is a deeply divided country, and for decades, the southern third has been dominated by Arab rulers from the north.

The Arab government prosecuted a vicious war against southerners, who have been chafing for their own separate state even before Sudan’s independence in 1956.

The government forces and their proxy militias burned down villages, slaughtered civilians, and kidnapped southern children and sold them to slave traders for a life of involuntary servitude in the north.

More than two million people were killed, and many of the tactics used to suppress the insurrection in the south were repeated in Darfur, in Sudan’s west.

Voters spoke of this legacy and the poverty that has accompanied it. That was in evidence all around.

Most polling places were shoddily built schools or government offices with bald concrete floors, no lights, crumbly walls, and rusted metal roofs. If southern Sudan becomes independent, it will be one of the poorest countries on Earth.

“But better to be free,’’ said Simon Matiek, a student.

Preliminary reports indicated that the voting was going smoothly.

“I would say it’s very orderly and very enthusiastic,’’ said Jimmy Carter, the former US president, who was in Juba to monitor the election.

If 60 percent of the registered voters cast ballots and the majority of voters choose secession, then the hard work begins.

Before Sudan can amicably split into two — the south plans to declare independence in July — several sticky issues need to be resolved.

The top two are sharing Sudan’s oil and demarcating the border, including the Abyei area, which both the north and south claim.

“A successful agreement could prevent conflict, whereas if Abyei and other issues remain unresolved, war becomes much more likely,’’ said John Prendergast of the antigenocide Enough Project.

Northern and southern forces have skirmished before in Abyei, and UN officials said nomads aligned to the north ambushed several southern soldiers Saturday, though no casualty figures were available.

In Juba, though, things stayed peaceful — rowdy, but peaceful. One man, who clearly had been celebrating with fortified beverages the night before, staggered around a polling station blowing an instrument fashioned from a cow’s horn and a length of rubber tubing.

At the tomb of John Garang, who is considered the father of southern Sudan’s modern liberation movement, the atmosphere was carnival-like, with troupes of dancers jumping around in faux leopard skin loincloths and politicians, soldiers, and celebrities all celebrating together.

“Who is that man talking?’’ a Sudanese journalist asked, gesturing to a white man with a scrum of reporters around him.

When told it was George Clooney, a movie star, the Sudanese journalist looked confused and walked away.

Some voters, though, seemed contemplative. They spoke of relatives who died in the liberation struggle. Some spoke of potential future problems, within the south, including favoritism by leaders.

Laraka Machar, who just finished college in Uganda, said he was voting for secession but has deep reservations about the leadership in the south and the rise of ethnic politics.

“Corruption is the order of the day,’’ he said.

Jacob Garang, 27, was a former child soldier who joined the rebellion when he was 12. He voted for secession.

“This is one of the unique days in my life,’’ he said. “I have to thank God that I am alive and that I found this day and I found myself in it.’’