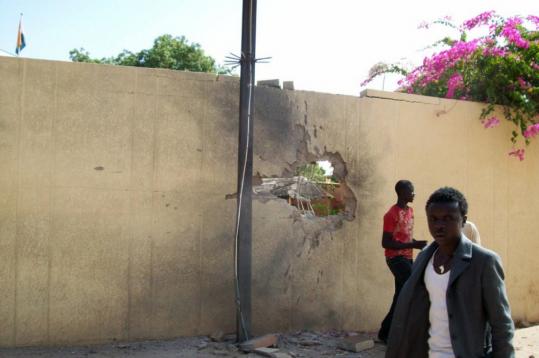 NIAMEY, Niger - Renegade soldiers in armored vehicles stormed Niger’s presidential palace with a hail of gunfire in broad daylight yesterday, kidnapping the country’s strongman president and then appearing on state television to declare they staged a successful coup.

The soldiers also said on state TV that the country’s constitution had been suspended and all institutions dissolved. Their spokesman said it is being led by the Supreme Council for the Restoration of Democracy, and asked citizens to have faith in them.

Smoke rose from the white-hued multistory palace complex, and the echo of machine-gun fire for at least two hours sent frightened residents running for cover, emptying the capital’s downtown boulevards at midday.

Radio France Internationale reported that soldiers burst in and neutralized the presidential guard before entering the room where President Mamadou Tandja was holding a Cabinet meeting. They escorted him outside to a waiting car, which drove him toward a military camp on the city’s outskirts. His whereabouts remained unknown hours later when the coup was announced.

Tandja was elected president in 1999 after an era of coups and rebellions in the landlocked desert country in West Africa. But instead of stepping down in December at the end of his second term, as mandated by law, he triggered a political crisis by pushing through a new constitution last summer that removed term limits and gave him near-totalitarian powers.

Niger has become increasingly isolated since then, with a 15-nation regional bloc suspending Niger from its ranks, and the United States cutting off nonhumanitarian aid and imposing travel restrictions.