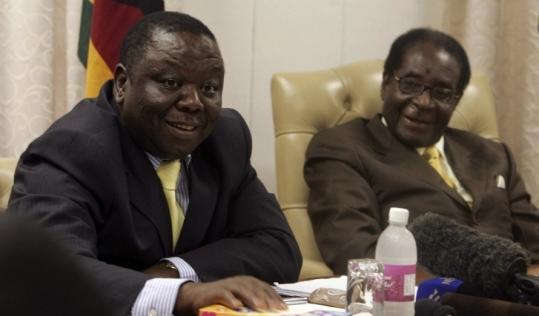 HARARE, Zimbabwe - President Robert Mugabe and his rival-turned-premier held a collegial end-of-year press conference yesterday but announced no resolution of issues that have undermined their partnership.

Earlier this week, aides announced that agreements on commissions to oversee human rights, the media, and elections had been reached during a meeting of Mugabe, Prime Minister Morgan Tsvangirai, and Deputy Prime Minister Arthur Mutambara, leader of a party closely allied with Tsvangirai’s Movement for Democratic Change. That had raised hopes of further progress yesterday.

After their meeting, the three joked and laughed, in sharp contrast to their years of sometimes deadly rivalry.

The improvement in atmosphere is encouraging, but remaining disagreements are among the stickiest - over the appointment of provincial governors, the central bank chief, and attorney general; accusations from Tsvangirai’s party that Mugabe supporters continue to abuse human rights; and accusations from Mugabe’s party that Tsvangirai’s group has done too little to persuade the international community to lift sanctions against Mugabe and his top loyalists.

Yesterday, the leaders said they were determined to clear outstanding issues before the new year. No new meeting of the top leaders was set, but the three indicated that their aides would be meeting.

“The three of us have agreed that we must finish the inclusive government issues quickly,’’ Mugabe said, adding he had signed off on several ambassadorial appointments made in consultation with his coalition partners.

He said Zimbabwe’s economy was improving, a sign “that the inclusive government is working.’’

Mugabe said that after years of antagonism, some had questioned whether the coalition partners could work together.

“Now we are drinking, talking, laughing together,’’ he said.

Tsvangirai, who earlier this year became so frustrated that he temporarily withdrew from the coalition, said yesterday he was optimistic the remaining problems would be resolved before the new year. He and Mugabe could turn to Zimbabwe’s neighbors for negotiating help if they did not succeed, he added.

Other regional leaders had pushed for the coalition, formed in February, following a series of inconclusive elections marred by violence blamed on Mugabe’s loyalists.

Tsvangirai ended his three-week boycott of the coalition after receiving assurances that Jacob Zuma, South Africa’s president, would intervene.