Ex-nurse’s aide in US claims his throne in Uganda 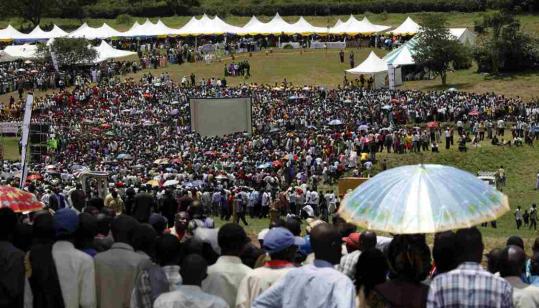 KASESE, Uganda - After years of political upheaval and financial struggle, Charles Wesley Mumbere has finally been crowned king of his people.

For years, Mumbere, 56, worked as a nurse’s aide in Maryland and Pennsylvania, caring for the elderly and sick. No one there suspected that he had inherited a royal title in his African homeland when he was just 13.

At a rally yesterday, President Yoweri Museveni officially recognized the 300,000-strong Rwenzururu Kingdom. Museveni restored the traditional kingdoms his predecessor banned in 1967, but has been adamant that kings restrict themselves to cultural duties and keep out of politics.

“It is a great moment to know that finally the central government has understood the demands of the Bakonzo people who have been seeking very hard for recognition of their identity,’’ Mumbere said in the whitewashed single-story building that serves as a palace.

The Rwenzururu parliament stands nearby, in a much larger structure made of reeds. It was there that the traditional private rituals were held Sunday night and yesterday morning to crown Mumbere king.

Among them was Masereka Tadai, 43, proudly overseeing practice for a march that retired scouts and girl guides would perform before the king.

“Everyone is very happy because the president has accepted to come here and officially recognize the Rwenzururu Kingdom,’’ Tadai said.

The new king of Uganda’s Mountains of the Moon has undergone many transformations - from teenage leader of a rebel force to impoverished student to a nursing home assistant working two jobs in the United States, where he lived for nearly 25 years.

Mumbere’s royal roots became public in Pennsylvania only this July, when he granted an interview to The Patriot-News of Harrisburg as he was preparing to return to Uganda.