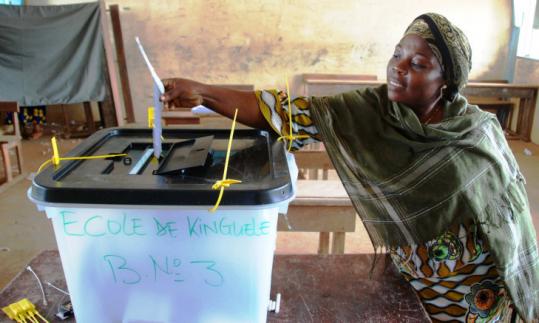 A woman cast her vote for president yesterday at a polling station in Libreville, Gabon, where turnout was heavy. (Joel Bouopda Tatou/ Associated Press)
Reuters / August 31, 2009

LIBREVILLE, Gabon - Voters in Gabon turned out in large numbers yesterday to elect a successor to longtime leader Omar Bongo, with the late president’s son seeking to take over rule of the central African oil nation.

Ali Ben Bongo, defense minister in his father’s government, had appeared to be cruising towards victory after a well-funded election campaign. But he faced a growing last-minute challenge after several candidates withdrew in favor of a leading rival.

“There is a mounting groundswell of opposition against frontrunner Ali Ben, which he will have to contend with if he does eventually come to power,’’ said Kissy Agyeman-Togobo, an analyst for IHS Global Insight.

There was no official turnout figure, but witnesses said polling was brisker than at the last election in 2005, with some voters making their way to polling stations well before dawn - only to experience hours of delays.

Investors are banking on a Ben Bongo win and play down the risk of unrest, but some analysts fear tensions could spill over as results start coming in, probably today or tomorrow.

Omar Bongo died in June. He used his grip on power and petrodollars from sub-Saharan Africa’s fifth largest producer to minimize ethnic tensions in the country of 1.5 million, home to investors such as France’s and Britain’s Tullow Oil.