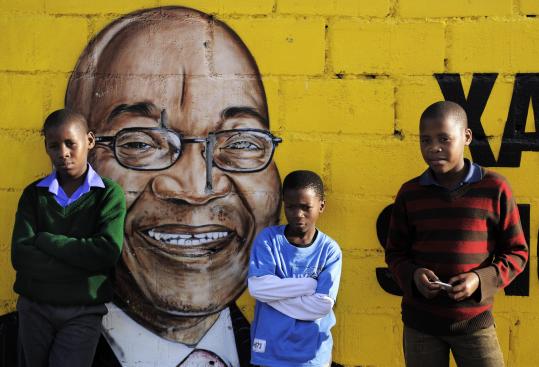 But five minutes later, he delivers a deadening, wooden speech that leaves the crowd of African National Congress supporters fidgeting and talking among themselves.

As Zuma leads his ANC into today's election, the big question is not whether the party will win (it will), nor even the margin of victory. It's what kind of president Zuma will be - a question that South Africans find surprisingly hard to answer.

"My greatest fear about Zuma is not that there is going to be a sudden ideological lurch or that the populist left will seize control of the agenda," said author Alec Russell, "but just that there will be a vacuum of leadership, and that he won't have the rigor and strength to lead the ANC and South Africa."

Russell, who wrote "Bring Me My Machine Gun," a study of the ANC after apartheid, said Zuma is perceived in the ANC as weaker than former president Nelson Mandela or his successor, Thabo Mbeki.

After 15 years in power, the inspiring liberation movement that fought apartheid and brought Mandela to power has settled into flabby middle age. The ANC government, warns Russell, is in danger of ossifying.

Service delivery has been poor - one reason why its campaign posters for "Better Health," "Better Education" and "More Jobs" look more like opposition promises than ruling-party posters.

On the opposition side, the Congress of the People, which split from the ANC late last year, is predicted by an opinion poll to attract about 9 percent of the vote, while the Democratic Alliance is expected to garner around 11 percent. With its history as the liberation party, the ANC is predicted to win nearly 65 percent.

His victory certain, Zuma will take power at a difficult time: The sharply declining economy will leave his government little wiggle room for grand new programs on poverty, education, or health.

Even during the commodities boom, South Africa fell shy of the 6 percent growth needed to cut the country's unemployment, which runs about 40 percent. But global demand for South African commodities has collapsed, manufacturers are laying off thousands of workers, and business confidence is down. When the global recession hit, investors fled, draining billions of dollars out of the economy almost overnight.

As the "Proudly South African" slogans of the "Rainbow Nation" grow stale, even staunch ANC supporters such as Doris Ltelalo, 64, are angry and skeptical.

The shack dweller from Soweto sells biscuits for a living. She pulls out a local newspaper and jabs an angry finger at a photo of local ANC municipal council member Zodwa Mfenyana, condemning the ANC's failure to help the poor.

Yet she'll still vote ANC, because "I'll always be ANC."

Lodrick Lekhulane, 29, an unemployed man who's lived in a smoke-stained Soweto shack for 15 years, is confused about what Zuma will bring and unsure whom to vote for. But he sees no point in swimming against a tidal wave.

"There are many people who want him, so it's useless to vote for another party," he says.

The poorly educated, unemployed young men who make up a large swath of Zuma's support expect him to deliver jobs, houses, services, and a share of South Africa's wealth.

"I believe he will do that," says Thomas Ngobeni, 38, an unemployed man sitting in the sun in a narrow alley in Alexandra township.

But many liberals fear a Zuma presidency after his hints at a return to the death penalty, his veiled threats to take on the judiciary and media, and even his comment that Afrikaners are the only "true" white South Africans.

Nobel laureate Desmond Tutu, who once urged Zuma to abandon his presidential ambition for the sake of the country, recently voiced those doubts:

"At the present time, I can't pretend to be looking forward to having him as my president," he said at a book launch this month.

"The ANC has certainly lost the intellectuals," Russell said. "There's no longer anyone who's arguing convincingly that the ANC is a great party. The intellectuals are casting around - and that's (intellectuals) of all races. There's a sense that a rougher, tougher crowd has taken over."