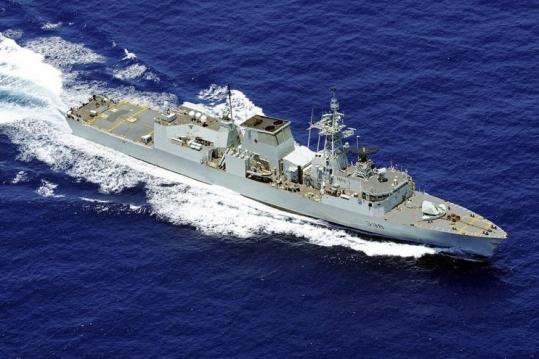 NAIROBI - NATO warships and helicopters pursued Somali pirates for seven hours after they attacked a Norwegian tanker, NATO spokesmen said yesterday, in a high-speed chase that ended when warning shots were fired at the pirates' skiff.

Seven pirates attempted to attack the MV Front Ardenne late Saturday but fled after the crew took evasive maneuvers and alerted warships in the area, said Portuguese Lieutenant Commander Alexandre Santos Fernandes, aboard a warship in the Gulf of Aden, and Commander Chris Davies of NATO's maritime headquarters in England.

Davies said the pirates sailed into the path of the Canadian warship Winnipeg, which was escorting a World Food Program delivery ship through the Gulf of Aden. The American ship USS Halyburton was also in the area and joined the chase.

"There was a lengthy pursuit, over seven hours," Davies said.

The pirates hurled weapons into the sea as the warships closed in. The ships are part of NATO's antipiracy mission.

"The skiff abandoned the scene and tried to escape to Somali territory," Fernandes said. "It was heading toward Bossaso; we managed to track them . . . warning shots have been made after several attempts to stop the vessel."

Fernandes said no shots were fired at the tanker.

Both ships deployed helicopters, and naval officers hailed the pirates over loudspeakers before finally firing the warning shots to stop them, Fernandes said, but not before the pirates dumped most of their weapons overboard.

NATO forces boarded the skiff, where they found a rocket-propelled grenade. They interrogated, disarmed, and released the pirates.

The pirates cannot be prosecuted under Canadian law because they did not attack Canadian citizens or interests and the crime was not committed on Canadian territory.

The pirates' release underscores the difficulties navies have in fighting rampant piracy off the coast of lawless Somalia. Most of the time foreign navies simply disarm and release the pirates they catch because of legal complications and logistical difficulties in transporting pirates and witnesses to court.