On African trip, pope warns on condom use 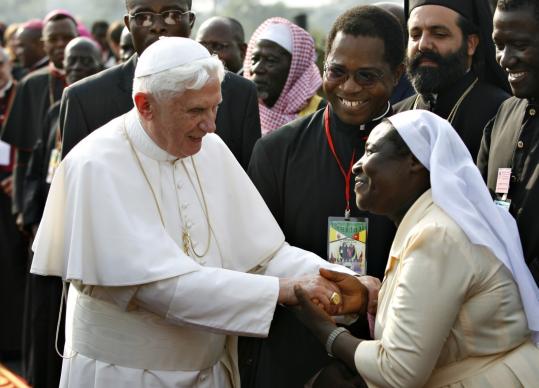 YAOUNDE, Cameroon - Pope Benedict XVI said condoms are not the answer to the AIDS epidemic in Africa and can make the problem worse, but his comment set off criticism yesterday as he began a weeklong trip to the continent, where some 22 million people are living with HIV.

Benedict's first statement on an issue that has divided even Catholic clergy working with AIDS patients came hours before he arrived in Cameroon's capital - greeted by thousands of flag-waving faithful who stood shoulder-to-shoulder in red dirt fields and jammed downtown streets for a glimpse of the pontiff's motorcade.

In his four years as pope, Benedict had never directly addressed condom use, although his position is not new. His predecessor, Pope John Paul II, often said that sexual abstinence - not condoms - was the best way to prevent the spread of the disease.

Benedict also said the Roman Catholic Church is at the forefront of the battle against AIDS.

"You can't resolve it with the distribution of condoms," the pope told reporters aboard the Alitalia plane heading to Yaounde. "On the contrary, it increases the problem."

The pope said a responsible and moral attitude toward sex would help fight the disease, as he answered questions submitted in advance by reporters traveling on the plane.

The Catholic Church rejects the use of condoms, as part of its overall teaching against artificial contraception. Senior Vatican officials have advocated fidelity in marriage and abstinence from premarital sex as key weapons in the fight against AIDS.

The late Cardinal Alfonso Lopez Trujillo made headlines in 2003 for saying that condoms may help spread AIDS by imparting a false sense of security, asserting they weren't effective in blocking transmission of the virus. The cardinal, who died last year, headed the Vatican's Pontifical Council for the Family.

Three-quarters of all AIDS deaths worldwide in 2007 were in sub-Saharan Africa, where some 22 million people are infected with HIV. The number represents two-thirds of the world's infections, according to UNAIDS.

Rebecca Hodes with the Treatment Action Campaign in South Africa said that if the pope is serious about preventing HIV infections, he should focus on promoting wide access to condoms and spreading information on how to use them.

"Instead, his opposition to condoms conveys that religious dogma is more important to him than the lives of Africans," said Hodes, head of policy, communication, and research for the group.

Hodes said the pope is right that condoms are not the sole solution to Africa's AIDS epidemic, but added that they are one of the very few proven measures to prevent HIV infections.

Even some priests and nuns working with those infected with HIV question the church's opposition to condoms amid the pandemic ravaging Africa. Ordinary Africans do as well.

"Talking about the non-use of condoms is out of place. We need condoms to protect ourselves against diseases and AIDS," teacher Narcisse Takou said in Yaounde.

Said Stanley Obale Okpu, a civil servant working in Cameroon's ministry of urban development: "What the pope says is an ideal for the Catholic Church. But he needs to look at the realities on the ground. One should be aware of these realities. In the case of Cameroon, and Africa as a whole, condoms are very necessary . . . You need condoms to prevent AIDS and [for] birth control."

A crowd of photographers and cameras flashed as the 81-year-old pontiff stepped off the plane into 88-degree heat, with humidity a wilting 90 percent.

It was the first stop on a weeklong pilgrimage that will also take Benedict to Angola as he seeks to draw international attention to Africa's problems of famine, poverty, and conflict.