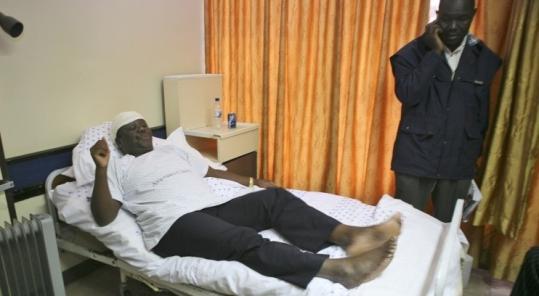 Prime Minister Morgan Tsvangirai of Zimbabwe before he left the hospital. He was injured in a crash that killed his wife. (Tsvangirayi Mukwazhi/ Pool Photo)
By Angus Shaw Associated Press / March 8, 2009
Text size – +

Tsvangirai's Movement for Democratic Change called for an investigation into the collision with a truck carrying US aid, but cautioned against concluding that it was the latest assassination attempt against the longtime opposition leader.

Friday's crash nonetheless "could have been avoided" if Tsvangirai had the kind of motorcade that usually travels with Mugabe, said Tendai Biti, the country's new finance minister and Tsvangirai's number two in the party.

A Movement for Democratic Change official who was traveling with Tsvangirai said the premier's Land Cruiser was accompanied by three vehicles with the party's security and one with Mugabe's agents, but not the kind of motorcade with dozens of cars and motorcycles that usually transports the president. The official spoke on the condition of anonymity because of the sensitivity of the issue.

Tsvangirai, who will turn 57 next week, flew yesterday to Botswana, where he will recuperate from head and chest injuries, a party official said.

The prime minister was traveling to a weekend rally in his home region when the collision occurred.

State television said the aid truck swerved on an uneven and dangerous single-lane stretch of road on the outskirts of the capital, Harare.

Tsvangirai's spokesman said the sport utility vehicle carrying the prime minister, his wife, driver, and bodyguard had sideswiped the truck and rolled at least three times.

Susan Tsvangirai, 50, was pronounced dead soon after arrival at a clinic about 25 miles from Harare, said Ian Makone, a secretary in the prime minister's office. The state-run Herald newspaper reported that the driver and bodyguard were injured. Tsvangirai's brother, Casper, told reporters the bodyguard had gone home and the driver remained hospitalized.