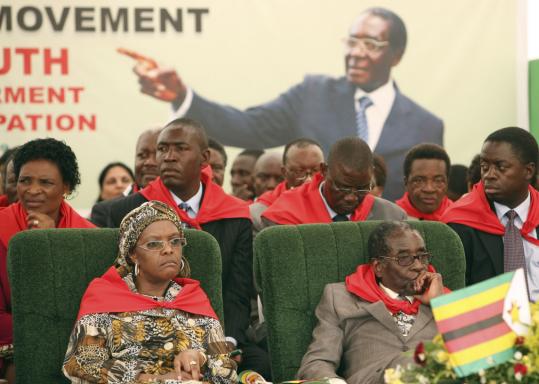 CHINHOYI, Zimbabwe - President Robert Mugabe said yesterday that land seizures from white farmers would continue and vowed to press ahead with plans for residents to take majority stakes in foreign companies operating in Zimbabwe.

Mugabe, who has been Zimbabwe's sole ruler for nearly three decades, is holding onto power despite economic and political turmoil that has forced him into a unity government with the opposition.

"There is no going back on the land reforms. Farms will not be returned back to former [white] farmers," Mugabe said. "That work will continue, but those farms have to be used properly.

"The farmers who owned these farms, which now have been designated and offered to new owners, must respect that law," he said. "They must vacate those farms."

Thousands of supporters of Mugabe's ZANU-PF party turned out yesterday for his 85th birthday rally at a sports field at Chinhoyi University about 60 miles west of Harare.

Prime Minister Morgan Tsvangirai was not at the rally, despite earlier indications he would attend.

Mugabe's spokesman, George Charamba, said Tsvangirai had opted out of the event after realizing it was organized by ZANU-PF.

"People should not read this as a snub," Charamba said.

Mugabe told the crowd that the Southern African Development Community, or SADC, tribunal, which last year ruled in favor of a group of white farmers whose farms had been targeted for seizure, had no authority to rule on the land seizures.

"Some farmers went to the SADC tribunal in Namibia, but that's nonsense, absolute nonsense. No one will follow that," he told supporters. "We have courts here in this country that can determine the rights of people."

SADC finance ministers on Friday agreed to push for donor help to save Zimbabwe from economic collapse, which critics blame on Mugabe's policies.

Zimbabwe's new unity government is heavily reliant on donors to revive the country, which is suffering hyperinflation, food shortages, and 90 percent unemployment.

Mugabe said the unity government will continue to push for a majority stake in companies operating in Zimbabwe, including mining, manufacturing, and banking companies.

"We would want to see a greater participation of our people in them, not less than 51 percent, in certain companies we would have designated.

Mugabe also told his party supporters that the unity government was a temporary arrangement and they should prepare for new elections, possibly after two years.

"Let's not mourn over the inclusive government. Let's accept it as it is. But this government is an interim government to stabilize the economy and end violence and conflict."