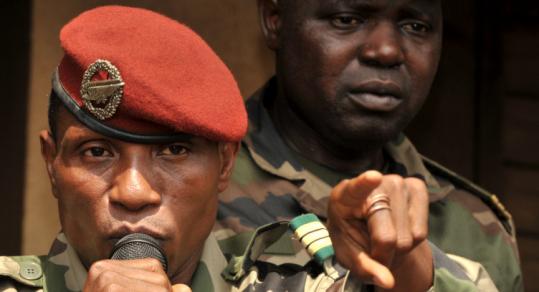 CONAKRY, Guinea - Guinea's coup leader declared a zero tolerance policy on corruption yesterday, vowing to renegotiate the country's numerous mining and trade contracts and warning he will execute anyone who embezzles state funds.

Captain Moussa Camara also extended an apparent concession to Guinea's powerful unions, telling them they could help choose a prime minister after international criticism that elections are not planned for two more years.

On a concrete stage inside the barracks from where he launched his rebellion Tuesday, Camara jabbed his finger at the sky as he swore to do away with the corruption that has drained the mineral-rich state's coffers and impoverished the West African nation's 10 million people.

"For the person who embezzles money, there won't be a trial. They'll be killed," he said, a promise that was met with cheers of "Bring them to justice!"

Guinea is the world's largest producer of bauxite, the raw material used to make aluminum, and also produces diamonds, gold, and timber. Yet its mineral wealth was siphoned off to enrich the country's longtime ruling family and its closest associates.

The European Union and the United States have called for the restoration of democracy in Guinea, but Camara has said elections will be held in December 2010. Neighboring Senegal, however, has declared support for the military group.

Yesterday, Camara said he would allow Guinea's unions and others to propose a prime minister.

Rabiatou Serah Diallo, head of one of Guinea's largest unions, welcomed the move. "If they deviate from the road they promise to take us on, then they'll find us blocking their path," she said of the coup leaders.

In 2007, Guinea's unions led weeks of deadly demonstrations calling for Conte to step down. He managed to retain power by agreeing to name a prime minister from a list of five potential premiers approved by the unions.

But Conte unexpectedly fired the prime minister, Lansana Kouyate, through a presidential decree in May after an uneasy 15-month power-sharing agreement and chose a replacement.

Camara also has invited foreign diplomats to meet with coup leaders Tuesday in an effort to gain international support for his leadership.

The coup after Conte's death has thrown the country into political turmoil.

Under the Guinea Constitution, the speaker of the National Assembly was to succeed the longtime strongman.

President Kgalema Motlanthe of South Africa on Friday condemned the coup as "an affront to peace, stability, and democracy," and called on the military rulers to hand over power to Aboubacar Sompare, the speaker. His whereabouts have remained unknown.

But President Abdoulaye Wade of Senegal has urged other countries to leave the new junta alone.

Camara said he may be able to hold elections in eight months, Wade recalled.