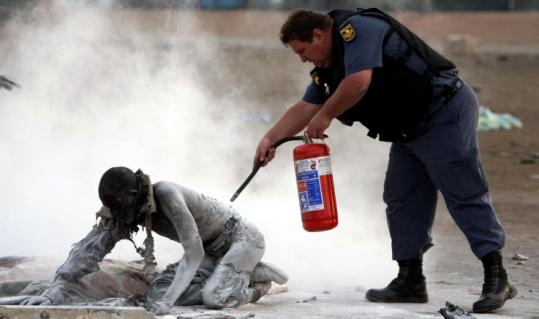 JOHANNESBURG - For South Africans with means, a fundamental question is: stay or go?

Yes, South Africa boasts perpetual sunshine, jaw-dropping scenery, and vigorously free media and civic debate. But since the dawn of democracy in 1994, many thousands have found reasons to emigrate, and 2008 delivered several more - political uncertainty, power shortages, and gruesome attacks on foreigners.

In this month's Harper's Magazine, a famed Afrikaner poet and former antiapartheid activist cited the brutality in an essay that gave his answer to the stay-or-go question: "My bitter advice" to young South Africans, Breyten Breytenbach wrote, "would be to go."

In doing so, Breytenbach turned up the heat in a debate in a nation struggling to transition from newfound freedom to the harsh realities of huge wealth gaps, unemployment, and a severe shortage of skills. And he brought South Africa's most revered figure, Nelson Mandela, into the fray.

Breytenbach, who has lived most of the past three decades outside South Africa, wrote his essay in the form of a letter to Mandela, whom he called a "wise and a curious and caring humanist."

But he chided the icon for wielding his influence to raise money for charities but not condemning South Africa's woes, such as corruption within the African National Congress, the legendary liberation movement turned ruling party.

"Would you consider the thought that your organization has lost the way?" Breytenbach, 69, wrote. "It is a harsh question; it may even suggest that we have only the ashes of spent dreams to poke around in."

The piece, which has made headlines and blogs here, prompted a stinging response from the Nelson Mandela Foundation.

"Come home and fight the good fight," Achmat Dangor, the foundation's chief executive, said in a statement addressed to Breytenbach. "Do what Mandela has challenged all of us to do - take personal responsibility [and] help lift the burden of leadership from the shoulders of people like him. He did not choose to be an icon."

Much of Breytenbach's essay is devoted to South Africa's particularly cruel form of crime, a subject that fills newspaper pages and fuels dinner table conversations in a nation where an average of 50 people are murdered each day, most in poor black neighborhoods.

Breytenbach described a recent visit to South Africa, where he said he felt a "sense of impending horror in the air," and began to calculate his chances of being raped, robbed, or killed.

He related the awful tales he has heard: A friend's grandmother pleading with robbers not to rape her, a fellow writer's nephew slain by an intruder, his own nephew stabbed in a parking lot.

"What sears the mind and chokes the heart first are the apparently random events that have become emblematic of a society in profound disarray," he wrote.

It is a sentiment shared by many who leave and typically cite crime as their top reason, polls show.

Though there are no firm statistics on emigration, some signs indicate it is growing. According to a survey of home-sellers, 20 percent of those who put their houses on the market in the third quarter of 2008 did so because they were emigrating, up from 9 percent in the last quarter of 2007.

In 2007, 39 percent of South Africans polled by a research organization called FutureFact said they were seriously considering leaving, more than double the percentage in 2000.