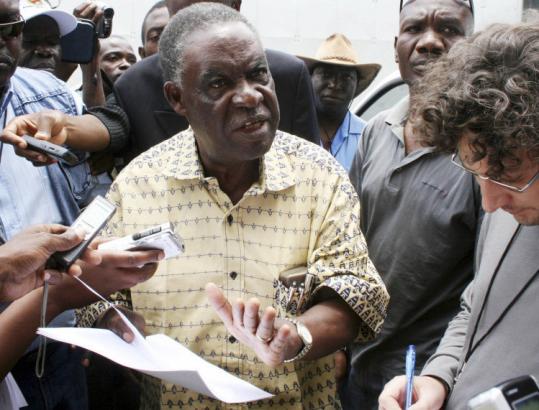 LUSAKA, Zambia - Zambian leader Rupiah Banda was poised to claim victory yesterday in the African nation's presidential race despite opposition leader Michael Sata's vow to contest a vote that he said had been rigged.

Banda, a pro-business centrist who became acting president after Levy Mwanawasa died of a stroke in August, trailed Sata throughout two days of vote counting but pulled ahead for the first time last night.

Preliminary results showed Banda with 708,683 votes to 682,171 for Sata, the leader of the opposition Patriotic Front. The count was based on results from 148 of 150 constituencies.

The ruling Movement for Multi-Party Democracy said it was confident that Banda would sweep the remaining two areas.

"This lead is permanent and we have won. We know we have won in every polling station and district of the last two constituencies," said Banda's campaign manager, Akashambatwa Mbikusita-Lewanika.

The Patriotic Front said Thursday's vote was marked by discrepancies between vote tallies and the number of voters on registration lists. It announced that it would ask a court to order a recount of the entire tally.

"If they [the court] can open tomorrow we will do so because what we are seeing displayed on the boards does not tally with the ballots in the boxes," said Willie Nsanda, chairman of the opposition party's election campaign.

Tension rose in the capital of Lusaka, a Sata stronghold, as the opposition's allegations of fraud became more strident.

Earlier, Sata stormed into a Lusaka conference hall where the results were being announced, accusing the electoral commission of padding Banda's vote total.

"I have evidence that results are being inflated. . . . They cheated me in 2006 and they want to do the same."

Sata, a populist with strong support among workers and the poor, made the same charge when he lost the 2006 presidential election to Mwanawasa, whose death triggered the election.

Election officials said the count was proceeding slowly, but defended their actions. "We are slow because we have to verify all the results," said Chris Akufuna, a spokeswoman for the electoral commission.

Independent election monitors have noted some irregularities in the vote but have stopped short of condemning it.

Less than half the 3.9 million registered voters cast ballots, according to the Foundation for Democratic Process, an independent Zambian group that was monitoring the election.

Stanley Mhango, the group's president, said outdated voter registration lists from 2006 had been used and he urged election officials to be open in dealing with fraud allegations.

It is unclear what Sata and his supporters will do if Banda is declared the winner.

Authorities have said the army is ready to prevent unrest in the country, one of the most politically stable in Africa.

"Defense forces are on alert in border areas and other places to quell firmly any violence," Home Affairs Minister Ronnie Shikapwasha said in an address broadcast on state television.

The winner faces the formidable task of matching Mwanawasa's strong record of fiscal discipline, praised by Western donors and investors, and cracking down on corruption, two rare successes in Africa.

The vote is also seen as a test of Zambia's commitment to multiparty democracy, restored in 1990 after 18 years of one-party rule under Kenneth Kaunda. Neither Banda nor Sata is expected to reshape the political landscape dramatically.