Rice meets Khadafy in Libya, in thaw between former foes 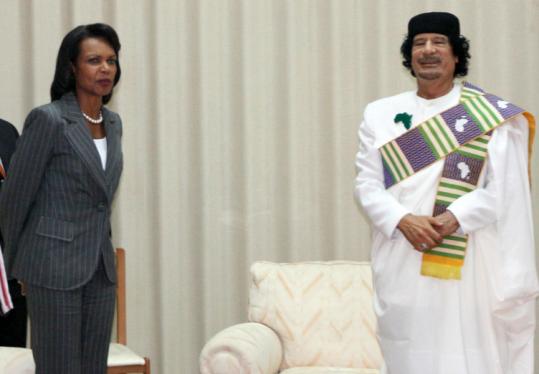 The first top US diplomat to visit the onetime pariah state in more than a half-century, Rice was greeted by Khadafy at the heavily armed presidential compound that US jets bombed 22 years ago at the height of tensions between the two countries. Rice appeared ready to shake his hand, but Khadafy, who has ruled Libya since a coup in 1969, simply placed his right hand over his chest, a traditional welcome, and ushered her to the side as he prepared to shake the hands of her male aides. When the two sat down to chat, he inquired about the hurricanes threatening the eastern United States.

Khadafy wore a simple Libyan white cotton robe and a black Libyan fez, accented by a green malachite brooch in the shape of Africa, a colored sash with shapes of Africa and highly polished black shoes. The formal meeting took place in a wood-paneled meeting room filled with incense, and Rice and Khadafy were expected to eat dinner in his traditional Bedouin tent.

Rice is the most senior US official ever to meet with Khadafy, and her trip here demonstrates that decades of hostility between the two countries have ended.

In 2003, Khadafy gave up his nascent programs to develop chemical, biological, and nuclear weapons and renounced support of international terrorism. Libya agreed to pay $2.7 billion to the families of the 270 victims of the 1988 bombing of Pan Am Flight 103, and US officials say its government has become helpful in thwarting the flow of foreign fighters from North Africa into Iraq.

"Quite frankly, I never thought I would be visiting Libya. It's quite something," Rice told reporters traveling with her as her plane flew to the capital from Portugal.

Rice is the first secretary of state to visit Libya since John Foster Dulles in 1953. Officials in both countries have eagerly anticipated her meeting with Khadafy; the Bush administration wants to showcase a rare foreign policy success, and Libya believes Rice's visit will finally put its notorious past behind it.

Although diplomatic relations between the two countries were restored in 2006, a rapprochement was slowed by litigation stemming from Libya's past involvement in terrorism. Last month, the last remaining hurdle preventing Rice's visit was cleared when the United States and Libya agreed to settle claims resulting from the 1986 bombing of the La Belle disco in Berlin.