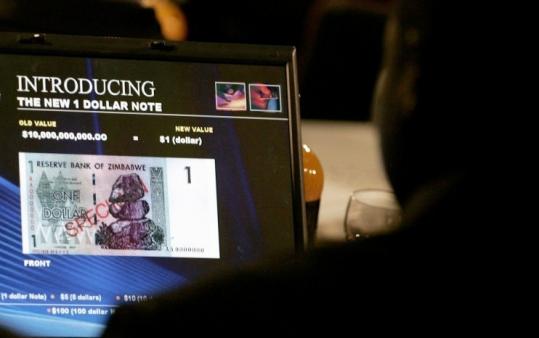 An official from the central bank looked at an image of the new Zimbabwean one dollar note on a computer yesterday. (Philimon Bulawayo/ Reuters Photo)
Email|Print|Single Page| Text size – + By Angus Shaw Associated Press / July 31, 2008

HARARE, Zimbabwe - Zimbabwe announced yesterday that it is knocking 10 zeros off its hyper-inflated currency - a move that turns 10 billion dollars into one.

President Robert Mugabe threatened a state of emergency if businesses profiteer from the country's economic crisis, a move that could give him even more sweeping powers to punish opponents in the event that political power-sharing talks fail.

"Entrepreneurs across the board, don't drive us further," Mugabe warned in a nationally televised address after the currency announcement. "If you drive us even more, we will impose emergency measures. They can be tough rules."

Governor Gideon Gono announced he was dropping 10 zeros from Zimbabwe's currency, effective tomorrow. The move comes a week after the issue of a 100 billion-dollar note - still not enough to buy a loaf of bread.

Gono said the new money would be launched with 500-dollar bills. He also said he was reintroducing coins, which have been obsolete for years, and told people to dig out their old ones.

John Takawira, 28, who works in an Internet cafe, said the latest move would do nothing to improve the lives of Zimbabweans.

"The prices of goods have already started shooting up," he said. "This is not going to make any change to my poor life."

Gono made the move because the high rate of inflation was hampering the country's computer systems. Computers, electronic calculators, and automated teller machines at Zimbabwe's banks cannot handle basic transactions in billions and trillions of dollars.

Inflation, the highest in the world, is officially running at 2.2 million percent in Zimbabwe, but independent economists say it is closer to 12.5 million percent.

Economist John Robertson said the new bills would also soon be worthless since the rate of inflation continues to skyrocket. What costs $1 at the beginning of the month can cost $20 by month's end, he said.