Shortage of paper to print currency 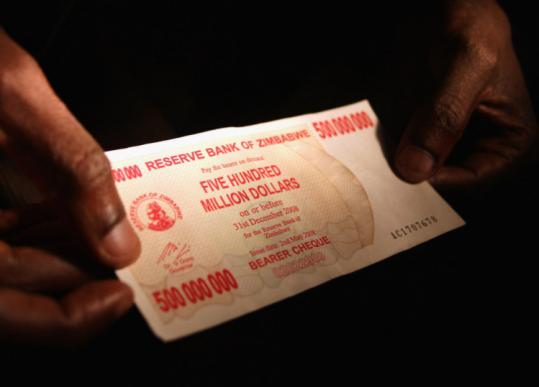 HARARE, Zimbabwe - It has come to this: Zimbabwe is about to run out of the paper to print money on.

Fidelity Printers & Refiners, the state-owned company that tirelessly churns out bank notes for the Robert Mugabe regime, was thrown into a crisis early this month after a German company stopped supplying bank note paper because of concerns over Zimbabwe's recent violent presidential election, widely seen as fraudulent by international observers.

The printing operation drastically slowed. Two-thirds of the 1,000-strong workforce was ordered to take a leave, and two of the three money-printing shifts were canceled.

The result on the streets was an immediate cash crunch.

"If you think this currency shortage is bad, wait two weeks. By then it will be a disaster," said a senior Fidelity staffer, who spoke to the Los Angeles Times on condition of anonymity because he would face dismissal and possible violence for talking to a Western journalist. The paper will run out in two weeks, he said.

Fidelity Printers is Mugabe's lifeline. It prints the money to pay the police, soldiers and intelligence organs that keep the regime in power. Lately, the money has been used to set up a network of command bases around the country staffed by liberation war veterans and youth militias, paid muscle to terrify the population into voting for Mugabe in the June 27 presidential runoff.

If the regime can't pay the security forces on which it relies, it would face economic paralysis - and potential collapse.

Zimbabwe's economic meltdown harks back to the collapse of its major export industry, commercial farming, after Mugabe's controversial land reform program early in the decade. That left the nation starved of foreign exchange, but government spending went on.

How did it do that? It printed money. But printing more and more money without an increase in productivity fueled rampant hyperinflation.

As hyperinflation spiraled last year, Fidelity printed million-dollar notes, then 5-million, 10-million, 25-million, 50-million. This year, it has been forced to print 100-million, 250-million and 500-million notes in rapid succession, all now practically worthless. The highest denomination is now 50 billion Zimbabwean dollars (worth one US dollar on the street).

Despite the recent currency shortage, the Zimbabwe dollar has continued to slide against the US dollar and shopkeepers are increasing their prices steeply. The price of the state-owned Herald newspaper leaped from 200,000 Zimbabwean dollars early this month to 25 billion now. Before the crunch, a beer at a bar in Harare, the capital, cost 15 billion Zimbabwean dollars. At 5 p.m. July 4, it cost 100 billion ($4 at the time) in the same bar.

Apart from the paper crisis, the real fear inside Fidelity is that its software license for the European bank note design technology that it uses could be withdrawn because of new sanctions threatened against the Mugabe regime, the staffer said. The design department is crucial: It must constantly conceive new notes as those on the streets are rendered worthless by hyperinflation.

"If that happened, that would be it," the staffer said.

The internal workings of Fidelity Printers have been one of the Mugabe regime's best-kept secrets for years. But as the government looks increasingly tenuous, institutions that were once impossible to penetrate are showing cracks.

Fidelity might be the beating heart of the regime, but the staffer revealed an institution under severe pressure.

The place pulsates with sound and smells of ink. The printing machines are old and often break down, requiring spare parts from Germany, which will no longer come. Workers are unhappy about salaries and fear for their jobs because of the paper shortage.

"When the machines were operating 24 hours a day, there was so much pressure on the employees which they just could not take," he said. "You couldn't take time off. Even weekends, people had to come in.

"People are aware that printing money is also one of the causes of the inflation. But you know, it's a job. You've got to do it."