Zimbabweans forced to vote in election 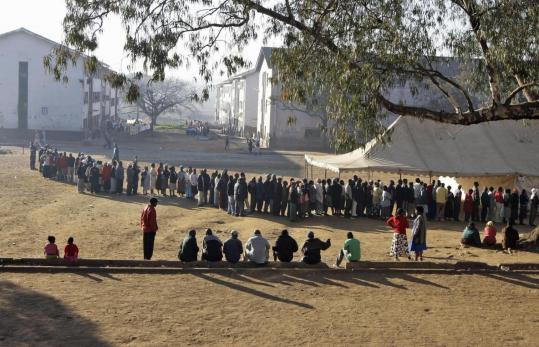 HARARE, Zimbabwe - President Robert Mugabe's militias drove a frightened electorate to the polls yesterday, checking off names of voters and threatening vengeance on those who failed to cast ballots for the longtime leader.

With the withdrawal of opposition party leader Morgan Tsvangirai, Mugabe was assured of remaining in power despite wide denunciations of the vote by neighboring African countries and other foreign governments.

Many who cast ballots in the uncontested race said they were being forced to do so by government militia members threatening them with violence or arson. Their assertions were supported by the presence of ruling-party officials stationed near each polling place to track who was voting, and for whom.

Voters were told to write down their name, address, and the last three digits of the serial number from their ballots, and submit the information to the command centers of Mugabe's party, the Zimbabwe African National Union-Patriotic Front, so their ballots could be checked.

The UN Security Council, in a statement backed by all 15 members, said the conditions for a free and fair election did not exist in Zimbabwe yesterday. Zalmay Khalilzad, the US ambassador to the United Nations, said the United States would raise the possibility of imposing sanctions.

Shortly after voting yesterday, Mugabe told Southern African Development Community observers that he was confident he would be victorious, a spokesman for the key regional bloc said on Angolan state radio. Election officials have not said when results would be issued.

The 84-year-old Mugabe, who has been president since independence in 1980, said Thursday that he was open to discussion with the opposition.

Tsvangirai, who withdrew from the race to protest government-sponsored violence against supporters of his Democratic Movement for Change, said the results would "reflect only the fear of the people." He had urged his backers not to vote unless they were put in danger.

"What is happening today is not an election. It is an exercise in mass intimidation," he said at a news conference outside his home. "Whatever might happen, the results . . . will not be recognized by the world."

In Chitungwiza, a bedroom community south of the capital, 25-year-old Spencer Mashonga said authorities had threatened to seize his family's house - built by a local governing council - if family members did not cast their ballots for Mugabe.

"We have been warned that we will lose our house if we don't," Mashonga said. "So we just have to vote. It's not like we want to vote."

Mugabe finished second to Tsvangirai in an initial round of voting in March. But the margin was not wide enough to avoid a runoff vote. Mugabe's ruling party then launched a campaign of beatings, arrests, and intimidation of Tsvangirai supporters that left nearly 90 dead and thousands injured or forced from their homes.

Tsvangirai has called on the international community to condemn the election and press for negotiations between the ruling and opposition parties.

World and African leaders responded with criticism of Mugabe, in many cases declaring the election illegitimate, but did not try to intervene and halt the polling process.

Tsvangirai also has sought the intervention of African Union peacekeeping troops as a way of restoring order to the country.

He has said one of the best opportunities for intervention would come at a summit meeting of the African Union that opened yesterday in the Egyptian resort town of Sharm El-Sheikh.

African heads of state are scheduled to gather at the summit Monday, and Mugabe is expected to attend.