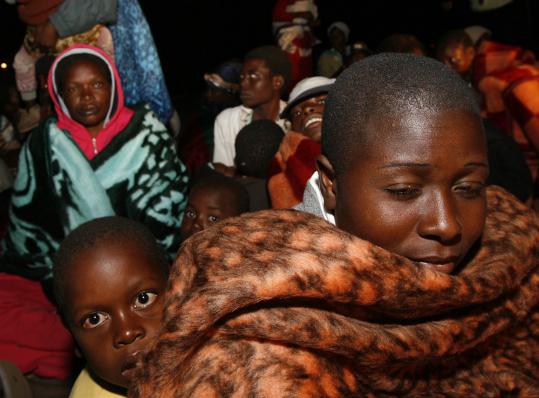 About 300 opposition victims of Zimbabwe's political violence walked from a park in central Harare to seek asylum in the South African Embassy yesterday. They were among the 1,300 opposition activists who had taken refuge in opposition headquarters. (ALEXANDER JOE/AFP/Getty Images)
Email|Print|Single Page| Text size – + By Los Angeles Times / June 26, 2008

Mugabe, who long shrugged off Western criticism and sanctions, has seen hitherto staunch allies in Africa and China turn away one by one in recent days, leaving him facing nearly complete international isolation.

He has vowed to proceed with tomorrow's scheduled presidential runoff election despite the fact his main opponent pulled out of the vote because of political violence that has left 85 supporters dead and more than 3,000 injured. Mugabe appeared determined to tough it out despite the foreign pressure, his lack of a majority in parliament, and a collapsed economy, ruling party officials said.

Addressing a dinner in London, the iconic Mandela, who now rarely comments on politics, broke his silence to decry the "tragic failure of leadership" in Zimbabwe.

"We look back at much human progress, but we sadly note so much failing as well," he said, mentioning conflicts in the Middle East, Iraq, and Darfur to the high-powered audience that included former US president Bill Clinton and Prime Minister Gordon Brown of Britain. "Nearer to home," Mandela continued, "we had seen the outbreak of violence against fellow Africans in our own country and the tragic failure of leadership in our neighboring Zimbabwe."

Another South African Nobel laureate and apartheid-struggle figure, Anglican Archbishop Desmond Tutu, spoke out in stronger terms, telling Australian television that Mugabe had "mutated into something quite unbelievable. He has really turned into a kind of Frankenstein for his people."

Fueling the pressure on Mugabe, 300 opposition victims of Zimbabwe's political violence walked from a park in central Harare to the South African Embassy late yesterday afternoon, where they sought asylum. They were among 1,300 opposition activists who had earlier taken refuge in opposition headquarters. They were left with nowhere to stay when the Movement for Democratic Change building was raided two days ago.

Looking fearful as they walked, some carried their belongings in plastic sacks, some were limping, some wore bandages. Among them were women.

As the horror of Zimbabwe's election violence has played out on televisions in recent days, Mugabe has seen his support deteriorate even among Southern African leaders normally loath to criticize one another. There have been calls for the election to be postponed from Kenya, Senegal, Botswana, Angola, Zambia, and the security troika of the Southern African Development Community - Tanzania, Swaziland, and Angola.

President Thabo Mbeki of South Africa has maintained his controversial "quiet diplomacy," but Mbeki's spokesman said yesterday that a high-level negotiator had been sent to try to mediate a settlement, including the postponement of tomorrow's vote.

Mugabe's ZANU-PF Party has also been repudiated by the president of South Africa's ruling African National Congress, Jacob Zuma, in a blow to the view that it shares liberation-struggle credentials with Zuma's party.

Seeking to ignore the increased pressure, Mugabe currently plans to have himself swiftly inaugurated for another five-year term, according to ZANU-PF sources. Mugabe also plans to quickly name his Cabinet, which sources said will not include opposition leader Morgan Tsvangirai, who pulled out of the presidential vote Sunday.