Reporter recounts his ordeal in a Harare jail 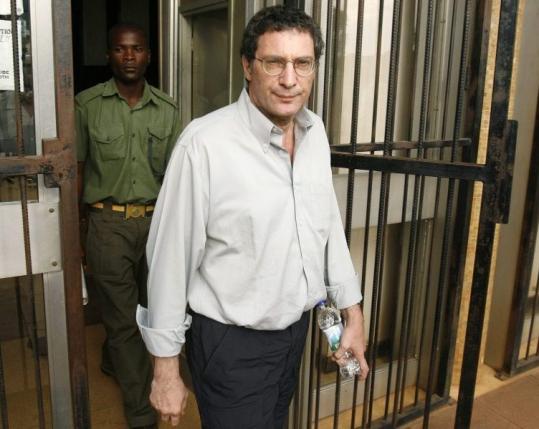 correspondent Barry Bearak was one of the foreign journalists jailed after the March 29 election in Zimbabwe. These are excerpts from his account of his ordeal.

HARARE, Zimbabwe - I had never been arrested before and the prospect of prison in Zimbabwe, one of the poorest, most repressive places on earth, seemed especially forbidding: the squalor, the teeming cells, the possibility of beatings. But I told myself what I'd repeatedly taught my two children: Life is a collection of experiences. You savor the good, you learn from the bad.

I was being charged with the crime of "committing journalism." One of my captors, Detective Inspector Dani Rangwani, described the offense to me as something despicable, almost hissing the words: "You've been gathering, processing, and disseminating the news."

And I'd been caught at it red-handed, my notes spread across my desk, my text messages readable on my cellphone, my stories preserved by Word in an open laptop.

At one point, 21 policemen and detectives milled about my room at a small lodge in Harare, the capital. They knocked against one another as they ambled about, some kneeling, some on tiptoes, searching for clues in the cabinets and drawers. Men with rifles guarded the door.

They immediately found my two US passports, ample evidence of subterfuge. One contained work papers indicating I was a reporter; the other, the one with my visa, said I had entered the country as a tourist.

"But you're actually a journalist?" I was asked.

"And you are not accredited in Zimbabwe?"

I was new to Africa. My wife, Celia Dugger, and I arrived in January as The New York Times' co-bureau chiefs in Johannesburg. With elections coming in Zimbabwe, I soon made two trips to Harare, each time taking ritualistic precautions for safety.

I left my credentials and laptop at home, entered the country as a tourist and interviewed people only behind closed doors. Each night, I destroyed my notes after e-mailing their contents to myself at an Internet cafe. I wrote my articles only upon returning to Johannesburg.

But the presidential election presented new complications. Daily articles needed to be filed. I had to openly work the streets, then go back to a room with a reliable wireless link to transmit from my laptop. Over time, normally wary reporters began taking risks that mocked earlier prudence, announcing their names and affiliations at opposition news conferences.

Necessity numbed my own caution.

I was staying at York Lodge, a collection of eight cottages spread around a lovely expanse of shrubs and lawn. At age 58, after 33 years as a reporter, I'd like to think I have a nose for trouble.

But the police had been at the lodge for 45 minutes on April 3 before I knew a thing.

Two reporters were rounded up there; two others were warned away before returning from the field. The other unfortunate was Stephen Bevan, 45, an able British freelancer who works for The Sunday Telegraph.

We were taken in a pickup truck to the Harare Central Police Station, a large colonial-era complex colloquially known as Law and Order. The detectives' evident glee at our capture was soon tempered by the arrival of a familiar and implacable foe, Beatrice Mtetwa, the nation's top human rights lawyer.

"There is no crime called 'committing journalism,' whether it is with accreditation or without," she informed us. This was actually news to us - and quite a relief. In fact, the law had been amended in January. It was now only illegal to falsely claim to be accredited, and neither Stephen nor I had done that.

But Mtetwa also explained the sinister realities: "Ultimately, there is no law in Zimbabwe. Your governments can't apply pressure; the British and the Americans have negative influence here. The police will hold you as long as they want."

Rangwani was lamenting his need for a copy of the updated statutes. "May I use yours?" he asked our lawyer, who took the opportunity to hector and berate him.

"This is a police state," Mtetwa said brassily. "The law is only applied when it serves the perpetuation of the state. How does it feel, Inspector Rangwani, to be used this way by the state?"

He replied meekly, "Madame, I agree with you and I have made a recommendation just as you have stated to drop the charges."

Suddenly, the nightmare seemed to be ending. But there was then an odd delay, then an abrupt reversal. Clemens Madzingo, the police's chief superintendent, himself gave us the news. New charges were forthcoming, he said. "Until then, you'll be back in the cells."

Sleep escaped me. The concrete was too hard, my body too bony. I had never so craved a pad and blanket. The insects were most annoying at night.

I spent my fourth - and final - night in the Harare cells, in pain, slapping at bugs, unable to sleep.

The magistrate released us on bail April 7. The real showdown came later - a hearing when Mtetwa would argue we never should have been arrested at all.

Magistrate Gloria Takundwa announced her decision April 16. We suspected that the government intended to rearrest us. But we were better prepared. We fled quickly from the courthouse. Then, by prearrangement, we rendezvoused with a driver in a fully gassed car, avoiding the country's airports and heading northwest to a small border crossing into Zambia.

I had left the cells with a case of scabies. But I am better now, back in Johannesburg, with Celia, with our sons, Max, 17, and Sam, 12.

In the meantime, Zimbabwe is beset with paroxysms of violence. Thuggery, torture, and murder are familiar implements in President Robert Mugabe's tool kit. Political opponents are being brutalized, as are everyday people whose voting defied him.