Shatters hope for end to crisis 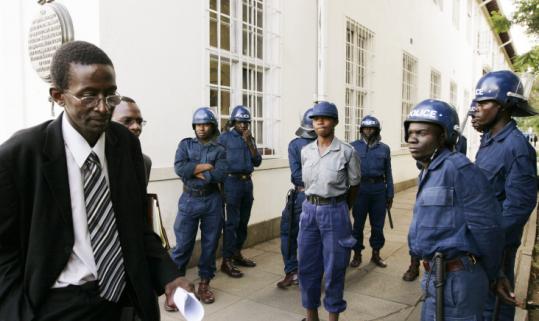 HARARE, Zimbabwe - Zimbabwe's High Court rejected an appeal yesterday for the immediate release of presidential election results, dashing hopes for an end to a paralyzing political crisis and prompting the opposition to call a nationwide strike.

Opposition leader Morgan Tsvangirai says he won the March 29 election outright and has accused President Robert Mugabe of holding back the results to try to maintain his 28-year grip in power. Independent tallies show Tsvangirai won, but did not receive enough votes to prevent a runoff.

Tsvangirai's Movement for Democratic Change had hoped the court, though stacked with Mugabe loyalists, would force the election commission to release the results after a 16-day wait. The commission, which published results for parliamentary and local elections within several days of the election, said it can't release the presidential results until it investigates electoral anomalies.

In rejecting the opposition petition, the court ruled that the commission's explanation was "legally valid," and said the electoral body "has not strayed from the law."

Government spokesman Bright Matonga praised the ruling and dismissed charges that the court was biased.

"The electoral commission should be allowed to do its job," he said.

Tsvangirai accused the election commission of working for the ruling party.

"Now, for the next three or four weeks, [the commission] will drag the time, while people get beaten and while a new electoral environment is being created," he told South Africa's independent e-tv station.

The opposition and human rights groups said ruling party militants have been waging a campaign of violence against opposition supporters ahead of a possible second round of voting.

The MDC called a nationwide strike for today in what would be the first major protest since the election.

The police have banned all political rallies, and opposition officials said today's action would be a quiet "stayaway," not a raucous strike complete with street protests.

"People are not going to go to work. They are going to be in their homes, expressing their dissatisfaction," MDC spokesman Nelson Chamisa said.