US diplomat likens violence in Kenya to 'ethnic cleansing' 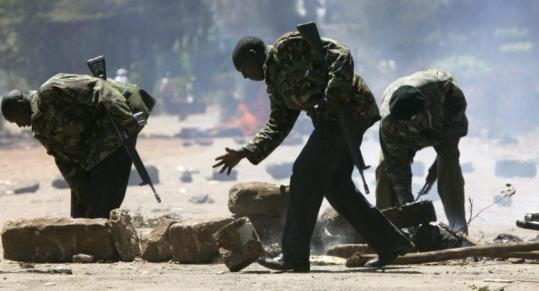 NAIROBI, Kenya - The top US diplomat for Africa said yesterday that the post-election violence in Kenya amounted to "ethnic cleansing" and that both President Mwai Kibaki and Raila Odinga, the opposition's leader, should be doing more to calm tensions.

Jendayi Frazer, assistant secretary of state for African affairs, said she had met with Kenyans who described being chased from their homes by organized groups that were "trying to get other ethnic groups to leave certain areas."

"That sounds like ethnic cleansing to me," Frazer told reporters in the Ethiopian capital Addis Ababa, where she is attending an African Union summit.

In Washington, State Department spokesman Sean McCormack backed off the remarks, saying the department was still compiling information on the violence and had not drawn any conclusions.

The term "ethnic cleansing" has no strict legal definition but generally refers to violently forcing people out of an area to separate them from another group.

The disputed Dec. 27 presidential election touched off a chain reaction of politically and ethnically charged violence and plunged this East African country into its worst crisis since independence from Britain in 1963.

Nearly 300,000 people have been forced to flee Nairobi's poorest neighborhoods and cities, towns, and villages stretching from the lush tea farms of central Kenya to the explosive Rift Valley region in the west of the country.

In that area, people from Kibaki's Kikuyu tribe and others living on Kikuyu land have been targeted by local tribal militias loyal to Odinga that appear to be using the crisis to settle old scores about land.

In recent days, thousands of Kikuyus have begun exacting revenge, attacking and dislodging several thousand people from Odinga's Luo tribe and other ethnic groups presumed to have backed him in the western towns of Nakuru and Naivasha.

On Tuesday, a high-ranking Kenyan diplomat described the violence as well organized, saying it was "an open secret" that scores of young, unemployed Kikuyu men were recruited from several Nairobi slums, paid, and bused to the two towns to launch attacks with machetes and clubs.

"They even raised money in public," said the diplomat, who spoke on condition of anonymity.

More than 800 people have been killed since Odinga accused Kibaki of stealing the election. International election observers have said the tally was so flawed it is impossible to know who won. The victims have included hundreds of protesters who opposition leaders say were gunned down by police.

Kofi Annan, the former UN secretary general, is mediating between the two sides, and the European Union and several countries have threatened to cut aid to Kibaki's government if he does not reach a compromise with Odinga.