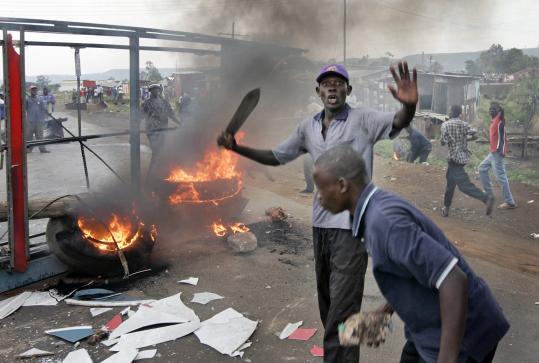 Witnesses described seeing two people pulled from cars and stoned to death, while another was burned alive in a minibus - the latest victims of a month of escalating violence triggered by a disputed presidential election. The death toll has soared to more than 800.

Kibaki has said he is open to direct talks with opposition leader Raila Odinga, who is from the Luo tribe, but that his position as president is not negotiable. Odinga said Kibaki must step down and only new elections will bring peace.

"The road is covered in blood. It's chaos. Luos are hunting Kikuyus for revenge," said Baraka Karama, a journalist for independent Kenya Television in Kisumu.

In an attack early today that could increase the unrest, two gunmen shot opposition lawmaker Mugabe Were to death as he drove up to his house in suburban Nairobi, police said. "We are treating it as a murder but we are not ruling out anything, including political motives," Kenya police spokesman Eric Kiraithe said. "We are urging everyone to remain calm."

There was no sign of relief from international mediators trying to persuade politicians to resolve the crisis that has erupted over Kibaki's Dec. 27 reelection balloting that international and local observers say was marred by a rigged vote tally.

Columns of smoke rose from burning homes in Kisumu, according to journalists who flew into the town.

"We wish to find one, a Kikuyu. . . . We will butcher them like a cow," said David Babgy, 24, who was among 50 men stopping buses at a roadblock of burned cars and uprooted lamp posts.

In Nakuru, provincial capital of the Rift Valley, 64 bodies were counted yesterday at the morgue, according to a worker who asked that his name not be used because he was not authorized to speak to the media.

Over the weekend, a gang of Kikuyus chased 19 people through a slum in Naivasha, eventually trapping them in a shanty that was set on fire, said Police Commander Grace Kakai. The victims were Luos. At least three other people were killed in the town over the weekend, District Commissioner Katee Mwanza said.

As youths set buses ablaze at Kisumu bus station yesterday, police used tear gas, then opened fire. A morgue attendant said one man had been shot in the head. A school janitor was killed by a stray bullet fired by a police officer, said Charles Odhiambo, a teacher at Lion's High School.

Fred Madanji, a gas station attendant, said he saw two protesters shot in the back and killed as they ran from police.

In villages around the town of Eldoret, gangs of Kalenjin youths hunted Kikuyus and killed six. Four were slashed with machetes and two were pulled from the cars and stoned to death, according to witnesses. A military helicopter tried to land at the village of Cheptiret but was prevented by youths who set grasslands ablaze.

Naivasha, Kenya's flower-exporting capital on a freshwater lake inhabited by pink flamingos, became a war zone where some 2,000 people from rival tribes faced off, taunting one another with machetes and clubs inset with nails.

The Rift Valley is home to the Kalenjin and Masai ethnic groups. British colonizers seized large tracts of land to cultivate fertile farms there. After independence in 1963, President Jomo Kenyatta, who was Kikuyu, flooded reclaimed farmlands with Kikuyu people, creating deep-seated resentment that exists to this day.

Kikuyus also are resented for their domination of politics and the economy, a success cemented by endemic corruption and a patronage system.