Dissatisfaction with his rule seen in wide protests 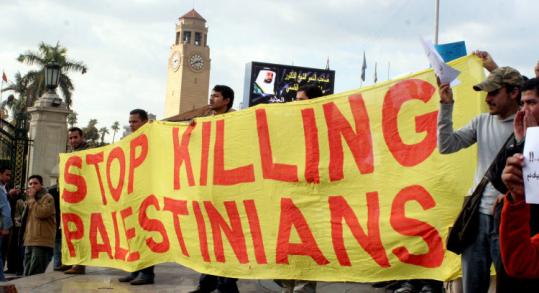 CAIRO - Egypt's main Islamist party and other opposition groups are strengthening their appeal by using images of desperate Palestinians streaming out of the Gaza Strip to provoke wider protests against the 26-year-old regime of President Hosni Mubarak.

Demonstrations in Cairo and throughout the country by the Muslim Brotherhood and other political groups ostensibly have been staged to declare Egyptian solidarity with Gaza residents. But they are also aimed at weakening Mubarak, whom the groups criticize for oppression, economic shortcomings, and close ties to Washington.

It is political theater punctuated with dangerous rhetoric. Mubarak's vast intelligence and security forces are attempting to prevent pro-Palestinian protests from erupting into sustained antigovernment rallies. But the Muslim Brotherhood and Kefaya, an umbrella opposition group of leftists and nationalists, are determined to do just that. The Muslim Brotherhood has sponsored 80 demonstrations since Wednesday, when hundreds of thousands of Palestinians began pouring into Egypt through a breached border wall.

The Muslim Brotherhood, which favors a government guided by Sharia, or religious law, has renounced its violent past. Despite the arrests of hundreds of its members, the group enjoys extensive support among the poor and middle class and poses the nation's most significant political threat to Mubarak's National Democratic Party.

The Palestinian cause is the crystallizing passion in the Arab world, but the Gaza border crisis has brought new urgency to a public relations battle between Islamists and secular governments, especially in Egypt.

It has also demonstrated that Hamas, the militant Islamist party that controls Gaza and is ideologically linked to the Muslim Brotherhood, remains a major factor in the future Palestinian equation, despite the wishes of Washington, Cairo, Israel, and the Palestinian Authority.

At the Rafah border crossing yesterday, Hamas cooperated for the first time with an Egyptian effort to assert control over the border. Egyptian guards and Hamas forces coordinated security and used concrete and barbed wire to close at least two gaps in the barrier that had been opened by explosions. At least four gaps remained open, including two for cars.

Thousands of Palestinians went back and forth. Traffic, thinned by rain Sunday, was heavier yesterday but down from last week's massive levels. Shoppers, however, found little to buy in the Egyptian Sinai, where prices began rising and the government limited the availability of food and other goods.

While Egyptian authorities debated how to shrink the number of Palestinians in Sinai, they also concentrated on domestic dissent. In recent days, police have broken up a number of protests and arrested scores of Muslim Brotherhood members and Kefaya activists.

Antigovernment organizations in Egypt have historically been disparate, seeking different religious and secular agendas and lacking a unifying spirit other than disdain for Mubarak's government, which receives nearly $2 billion a year in US aid and upholds an unpopular peace treaty with Israel.

The Muslim Brotherhood, whose members ran as independents and won 20 percent of the seats in Parliament in 2005, said its chief aim is to support Palestinians and condemn US and Israeli policies. But the organization conceded that the protests have grown wider in scope. Banners in a Cairo demonstration of 2,000 protesters last week included slogans sympathetic to Palestinians and vitriolic toward Egypt, such as "A Country Without Justice."

"The regime dealt brutally with demonstrators because it is concerned about domestic stability," said Abdel Moneim Abouel Fotouh, a Muslim Brotherhood leader. "The regime knows that there is public outrage for other reasons including inflation, unemployment, and other accumulated problems. It fears that things will explode."

Egyptians are "terribly depressed by the domestic situation and want to express themselves by any means," said Georges Ishaq, a leader of Kefaya group. "They seized [Gaza] as a chance to express their views."