Cape and Islands hardest hit by the heavy rains 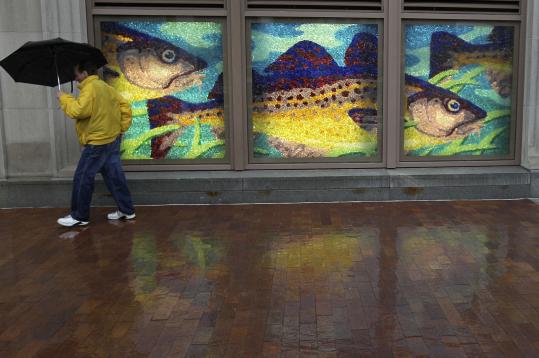 A passerby on Atlantic Avenue in Boston could not have picked a more fitting mural to stroll past yesterday as heavy rainfall hit the metropolitan area. (David L. Ryan/ Globe Staff)
By Jenna Duncan and Katherine Landergan Globe Correspondents / April 14, 2011

The Cape and Islands received the brunt of a storm that dumped buckets of rain on Massachusetts yesterday.

By 7:30 last night, 4.89 inches of rain had fallen in Falmouth, the National Weather Service in Taunton reported.

In Vineyard Haven on Martha’s Vineyard, 4.84 inches had fallen by 7:30 p.m., the weather service said.

A weather service map indicated there was a small swath of very heavy precipitation during the storm that stretched from the Vineyard into the Falmouth area in the Upper Cape.

“I haven’t seen this much water in about 10 years,’’ said John McCarthy, a manager at Cape Cod Campresort & Cabins in Falmouth. “It’s been quite disruptive.’’

McCarthy said he did not have any outdoor workers come in yesterday to his 55-acre facility because he knew the rain was coming. The power had gone out three times, and some of his phone lines went down, he said.

After 7 a.m., the Falmouth Fire Department made several trips to rescue people from their cars, said Captain Michael White. In some areas, the water was 3 feet deep.

“A lot of the side roads and the Main Street area are flooded, and we’ve had to go out a few times to get people out of vehicles,’’ said White. “But everyone is OK. It’s the issue of people driving through puddles and not making it.’’

Several police stations in Martha’s Vineyard said they did not have any flooding issues or have to rescue anyone, despite the heavy rainfall.

The heavy rains also affected commuters traveling on Interstate 95 over the Pawtucket Bridge just over the border in Rhode Island, where the high-speed north and south lanes were shut down due to flooding, the Rhode Island Department of Transportation said. A damaged drainage pipe caused the water buildup, and crews worked to remove the water.

The National Weather Service issued a flood warning for the basin yesterday, as well, extending from Montague to Middleton, Conn., along with areas in Springfield and Greenfield.

Kyle Cogswell, a firefighter at the Turners Falls Fire Department, reported light flooding along the river.

The weather service forecasted a spot shower or two after midnight.

Today is expected to be slightly cloudy with a break of sunshine at midday. Highs will rise to the upper 50s to low 60s, with slightly colder temperatures forecast for Cape Cod and the Islands.

Sunny skies are forecast for tomorrow, and highs will be around 50.

It will be mostly cloudy Saturday, with another rain system moving in that evening through Sunday night.

Globe correspondent Vivian Ho contributed to this report. Duncan can be reached at jduncan@globe.com; Landergan at klandergan@globe.com.