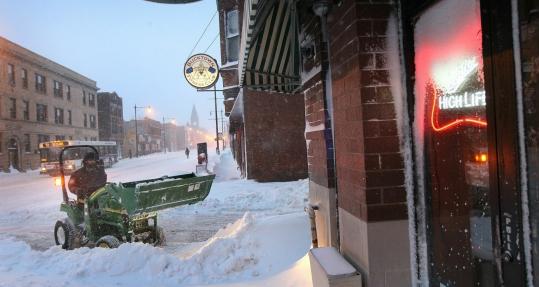 WASHINGTON — The winter storms that buried the Midwest this week and are delivering yet another blow to the Northeast will likely slow the US economy only modestly, analysts say.

“Annoying as it all is, the effect on [growth] is going to be on the smaller side,’’ says David Resler, chief US economist at Global Economics.

Economists who were surveyed last month by the Associated Press estimated the economy would grow at an annual pace of 3.4 percent in the first three months of 2011, up from less than 3 percent last year. Most aren’t ready to revise their forecasts to reflect weather-related slowdown at airlines, retailers, and other businesses.

Flight cancellations topped 5,000 for a second day as ice and snow slowed airport activity across much of the nation.

“There has to be a negative effect,’’ says Joseph LaVorgna, chief US economist at . But he thinks the weather will be only a “temporary depressant’’ for a steadily strengthening economy.

The latest storm, called the worst in decades, barreled toward the Northeast yesterday. Chicago got 19.5 inches of snow. Up to 18 inches fell in Missouri. More than a foot dropped on northern Indiana and southeast Kansas, and Oklahoma saw up to a foot.

Deutsche Bank says it thinks severe weather last month hurt the job market in January. It predicts the government will report tomorrow that the economy generated a lackluster 125,000 jobs last month. But history suggests any weather-related slowdown in hiring might not last long. In January 1996, severe weather was the reason net job creation fell by 19,000. The next month, as the weather eased, job growth bounced back.

The storms have kept some shoppers at home. Retailers are expected to report today that sales grew 1.5 percent to 2 percent in January, down from an original estimate of 2.5 percent growth, according to the International Council of Shopping Centers.

LaVorgna doesn’t expect the poor weather to cause lasting damage. Any wintry slowdown in January and February is likely to be balanced by renewed growth before the January-March quarter ends.