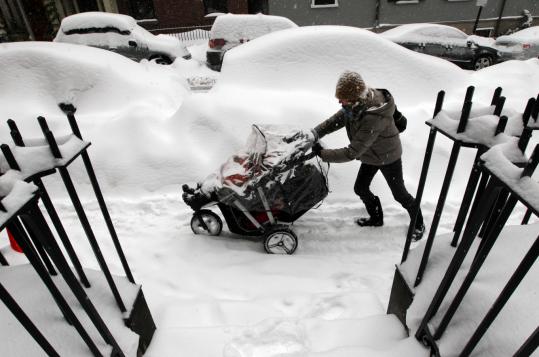 The owner of the gas station on Commonwealth Avenue in Brighton had nowhere left to put snow after all the recent storms. So he began dumping it over a fence along his property onto the wooded grounds of a 161-year-old city cemetery where Civil War veterans are buried, city officials allege.

“That struck me as a pretty lousy thing to do,’’ said Michael Mackan, chief of code enforcement at the city’s Inspectional Services Department, which issued the gas station a $2,500 fine.

The station was apparently a casualty of the misery of the nonstop snowstorms, which have sparked a record number of complaints from city residents accusing neighbors of not doing their share to clear the way, among other code violations.

In the last month, Inspectional Services received 2,401 complaints for code enforcement violations — a record for one month — many of them for failing to shovel snow from a sidewalk or improperly removing it from one’s property.

The department’s previous high for complaints in one month was during the Valentine’s Day ice storm in February 2007, when it received 1,313 complaints.

The department so far this season has issued more than 1,600 citations to homeowners for failing to shovel the sidewalks in front of their homes, a $50 fine for single-family homes and a $100 fine for those buildings with more than 16 units. Homeowners and business owners are required to shovel the walkways that abut their property within three hours of a snowstorm.

During the same period last year, the department issued fewer than 900 of the same citations.

A flurry of citations also followed the late December snowstorm. City officials issued 173 tickets on Dec. 28, compared with 20 issued in all of December 2009. The intensified ticketing followed a recent Supreme Judicial Court decision that holds property owners accountable for injuries linked to snow and ice on their land.

Mackan’s division issues citations for everything from overloaded dumpsters to illegal signage. But this time of the year, his 16 officers are mainly responding to complaints about illegal dumping of snow from private property onto public property, shoveling violations, and other code violations that arise from the snow.

“We react to complaints,’’ Mackan said. “Where the complaints are, we go.’’

This winter, the majority of citations have been issued in the ward that includes Mattapan and Hyde Park. More than 150 citations were issued there between Dec. 20 and Jan. 30.

Mackan said that residents can appeal the citations and that those who are elderly or have a disability can seek assistance from the city.

At the Sunoco station in Brighton, a man who identified himself as the owner but would not give his name said he planned to appeal the fine.

“We didn’t put the snow in the cemetery,’’ he said. “It just went over the fence, which was already broken.’’