How other cities fight the deluge 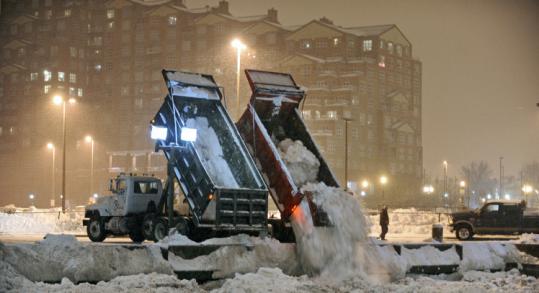 And as Boston takes on more snow today, nerve-jangled residents are demanding the city get rid of it any way it can — suggesting snow be dumped in the harbor or reduced to water by huge snow melters.

What do other snowbound cities do? The Globe asked a few.

Some use snow melters — hot tanks where snow is dumped or machines that resemble giant hair driers. One employs special “snow chutes’’ that feed melted snow to a processing plant. Other cities, like Buffalo and Toronto, see steep snowbanks as a simple fact of life in cold climates and cite the high expense of collecting and disposing of snow on a large scale.

“We’re likely not going to haul any snow for a storm like this,’’ said Peter Cutler, communications director for the mayor of Buffalo, where preparations were underway for at least a foot of snow. “Our focus will be the streets.’’

Minneapolis, which gets an average of 50 inches each year, says there is no better way than loading it in a truck and hauling it away, however slow and expensive it might be.

“There’s no shortcut, no magic bullet, nothing you can buy that will make it all go away,’’ said Mike Kennedy, director of transportation maintenance and repair for the public works department in Minneapolis. “It just takes time.’’

Most winters, the city simply lets snow pile up, but this year has removed so much its snow dump is nearly full.

“Generally speaking, we plow to the side and that’s enough,’’ he said. “But you can only stack it so high. We’ve done a vast amount of snow removal, and at great cost.’’

Last fall, the city bought a $250,000 snow melter, which it stations at the dump. Describing it as a “giant boiler,’’ Kennedy said the massive machine has helped, but only so much, and he downplayed expectations.

“They shouldn’t get too excited,’’ he said. “The dream doesn’t match the reality.’’

Boston does not use snow melters, and state environmental regulations discourage dumping plowed snow — contaminated with salt, sand, debris, and oil — into water or wetlands. According to Joe Ferson, a spokesman for the state’s environmental protection department, the agency has received a number of complaints of improper snow dumping, but given the extent of the problem has also granted some waivers.

“We’re obviously at or near the emergency stage,’’ said Ferson said. “Some communities have exhausted all their options.’’

Thomas M. Menino, Boston’s mayor, said Monday that snow melters are expensive, placing the cost around $250,000, and that the city would have to buy several to make an appreciable dent.

“In an ideal world, I’d love to have them. But right now we don’t have an ideal world,’’ he said. “We have a world in which Mother Nature is really drawing down our budget.’’

Currently, the city hauls away massive amounts of snow to designated “snow farms,’’ where it slowly melts into the ground. Last weekend alone, crews removed more than 37,000 tons of snow from streets and neighborhoods, and the city was out again this week. It also opened another snow farm.

Despite the efforts, steady accumulations and low temperatures have left snowbanks intact, and many narrow neighborhood streets nearly frozen in place. Officials in other cities expressed surprise that a place accustomed to harsh winters wouldn’t do more to ease them.

“That could never happen here,’’ said Cecilia Gilbert, a spokesman for the public works department in Milwaukee, where heavy snow is expected tomorrow. “Heads would roll.’’

Gilbert said the city sends out hundreds of front-end loaders to remove the snow, and said the city hasn’t had significant snowbanks since the 1970s. Even in 2008, when the city was pounded with 108 inches of snow, drifts were minimized, she said.

“We haul it away,’’ Gilbert said. “We don’t just leave it there. People in Milwaukee have very high expectations for snow removal.’’

Montreal has similar standards, according to a city official. Armed with a $145 million annual snow removal budget, the city thoroughly clears the streets after every major snowfall, said Michel Frenette, an engineer for the city’s snow operations department. The city hauls about 30 percent of its snow to facilities where the snow melts into the sewer system, then flows into a treatment plant before discharge. The remainder is dumped at a quarry and above-ground sites where it melts into the ground.

In Toronto, crews usually leave the snow at the curb, only hauling away piles to dumping areas when they get large enough to constrict roads.

“We find ourselves removing snow in older parts of town where the streets are narrow,’’ said Denzil Minnan-Wong, who heads the City Council’s public works and infrastructure committee. The city uses melting machines but they are a relatively small part of the total operation, he said.

Weary Boston residents can take heart in one fact. Grousing about snow appears universal, even in cities with reputations for stoically braving harsh winters.

“As hardened as they might be to it, their patience wears thin,’’ Cutler said of Buffalo residents.

Andrew Ryan of the Globe Staff contributed to this report. Peter Schworm can be reached at schworm@globe.com.