As children revel in snow days, working parents stress out 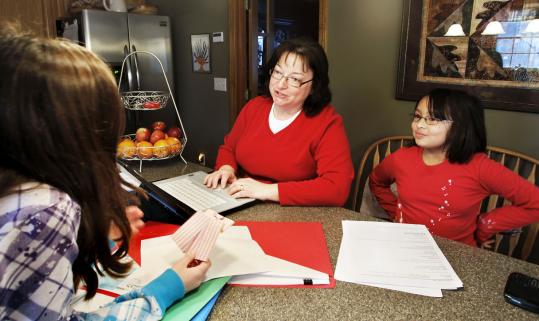 As the snow accumulates outside, the hassles are also piling up for parents.

With some Boston-area schools closed four days already this month due to snow, working couples have been scrambling to make arrangements for their children. Some have to take time off to watch their children; others drop off their little ones with friends or relatives. Many work from home, getting up before dawn and working late into the night — and beyond — as they juggle e-mails and art projects.

“Here we go again,’’ said Lisa Chau, who got up at 4 a.m. yesterday to get a jump on her information technology work at home in Groton before her 9-year-old daughter woke up. “I’ll be working all weekend.’’

Myra Vargas didn’t realize her 12-year-old son’s school in Brookline was closed yesterday until she pulled up to the building at 7:40 a.m. Her first thought, she said, was: “Oh my god, what are we going to do?’’

Vargas, an accounting coordinator at the nonprofit Crittenton Women’s Union, didn’t want to take a second unplanned vacation day this month to take care of her son and then have to work late the next day to catch up. Her husband doesn’t get paid when he stays home from his real estate job to be with their son, as he has done twice this month already, and they can’t afford to hire someone to watch him.

Luckily, Vargas’s sister-in-law was able to take in their son yesterday, but Vargas said she has had enough. It is only January, and already she has found herself pleading with Mother Nature: “Please don’t snow anymore.’’

Many other parents are no doubt making the same plea. In three quarters of married couples with children under the age of 15, both parents work, said Bradley Harrington, executive director at Boston College’s Center for Work & Family. And dealing with child care at the last minute can overwhelm already overscheduled lives.

“It can create an enormous amount of stress,’’ said Harrington, who worked from his home in Winchester last Friday and again yesterday to take care of his three children, ages 10, 13, and 15.

For Chad Minnich, who works in marketing at Boston College’s Sloan Center on Aging & Work, the extra work begins before the first flake falls. Prior to last week’s storm, Minnich was downloading documents so he could work from home in Upton while he watched his sons, ages 5 and 3. The day after, a Saturday, he tended to work tasks he couldn’t get to the day before.

“A snow day, it’s not just one day, it’s like it has a ripple effect,’’ said Minnich, who shipped the children off to his father’s house yesterday so he could get more work done. “You’re basically having to work around the clock around the weather.’’

Some neighbors have been banding together to watch one another’s kids. One recent snow day, Alyson Goodrow had eight youngsters at her house in Roslindale, only two of whom belonged to her. Goodrow took the day off from her communications job at Franklin W. Olin College of Engineering in Needham and turned it into a kind of play date, though she and her fellow moms were all answering e-mails at the dining room table while their children played with Matchbox cars.

“It’s so much more stressful than I can remember a winter being for a long time,’’ said Goodrow, who took another vacation day yesterday to watch her children.

One of the mothers at Goodrow’s dining room table was Juli Greenwood, who left her two children, ages 4 and 6, with Goodrow that afternoon so she could focus on her work for Chen PR, a Waltham public relations firm.

“I feel like even those of us who normally don’t complain are feeling pretty overwhelmed by it all,’’ said Greenwood, a single mother who worked from home again yesterday, bribing her children to behave by promising them chocolate-covered graham crackers from . “It definitely makes you look forward to spring.’’

But some parents have found a silver lining amid the snow. Wendy Flaherty likes the fact that the weather doesn’t just close her children’s school, it also cancels the activities she normally has to ferry them to, such as Girl Scouts and karate.

“Selfishly, I’m kind of excited,’’ said Flaherty, who was also happy to be working from home yesterday instead of making the 45-minute commute from Groton to her marketing job at the Massachusetts Association of Realtors in Waltham.

Harvard University astronomy professor David Charbonneau doesn’t mind the snow days either. Harvard subsidizes emergency child care for its employees, so when his daughters’ day care shut down yesterday, Charbonneau hired a babysitter from Parents in a Pinch Inc. in Brookline to take care of his 1-, 3-, and 5-year-olds.

Without the benefit, snow days could be quite disruptive, he said: “You need to have a good system in place so that you can bounce back.’’

Business at Parents in a Pinch has jumped 50 percent on these snow days, said chief executive Barbara Siegel. It’s a much different world than it was when Siegel started her Brookline business in 1984 and most people weren’t able to work from home.

“They just knew, this is just a dead day,’’ she said. “Now it’s much harder on parents because the expectation is the work will get done no matter where you are.’’

Parents, how have school
snow days affected you?