Nor’easter churns up Charles River to a yellow hue 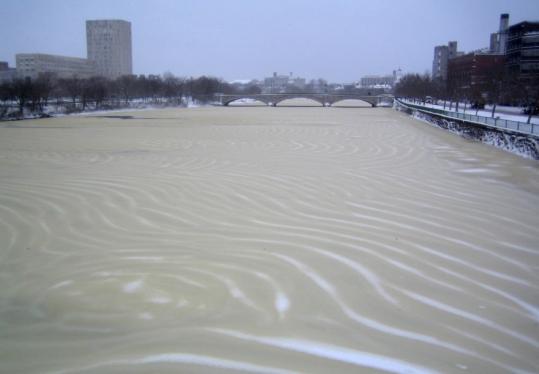 While environmental specialists said there appeared to be no reason to worry about the yellow water in the Charles River, they said they will keep an eye out for similar color changes. (Will McDonald)
By Carolyn Y. Johnson and Stewart Bishop Globe Staff | Globe Correspondent / December 29, 2010

Strollers along the snowy Esplanade paused to gawk; Red Line riders did a double take. The reason: The Charles River seemed to turn yellow during the major nor’easter that hammered the state Sunday and Monday, raising fears that the storm had somehow tainted the iconic waterway.

But not to worry, environmental officials say. The river’s natural color is a yellow-brown due to tannins from organic matter that seep into the slow-moving water, according to Julie Wood, a watershed scientist at the Charles River Watershed Association.

However, she acknowledged that in four years working at the association, she had never seen the river look quite so yellow as this week.

After inspecting it in several spots yesterday afternoon, Wood said the shade was probably created as the storm’s fierce winds churned up the water, mixing the yellow-brown water with ice and snow, which then refroze.

What might have made the color especially striking, she said, was the contrast to the pristine white snow on the banks and the fact that the river was not frozen solid.

“A lot of times when we get heavy snow, the river is already frozen, so you just get the white blanket over the river,’’ Wood said. “That wasn’t the case this time,’’ with many parts of the river partly frozen when the storm hit.

Catherine Williams — a spokeswoman for the Massachusetts Department of Environmental Protection, which took samples and performed tests on the river Monday — said the yellow-brown color of the river was a normal phenomenon.

“It’s actually a natural occurrence,’’ Williams said. “Some of the storm water runoff has seeped out onto the ice. That combination of organic matter is what gives it the yellow-brownish color.’’

She said that test results were typical for the river.

“The pH was normal; there was no odor and no sheen,’’ said Williams.

On a sunny day, the river may appear bluish, when the sky and the sun reflect off the water. But Wood said that a clear cup of the water from the river would have a tealike tinge year-round. If the source of the yellow color were a spill of some kind, there would probably be a contaminant plume, with some areas more affected by the color than others. Instead, the yellowish hue was evenly distributed along the river.

While environmental specialists said there appeared to be no reason to worry about the yellow water, they did say they will keep an eye out for similar color changes in the future.

“I’m definitely going to keep these photos in our file for reference,’’ Wood said. “We can see whether this type of thing is happening again.’’