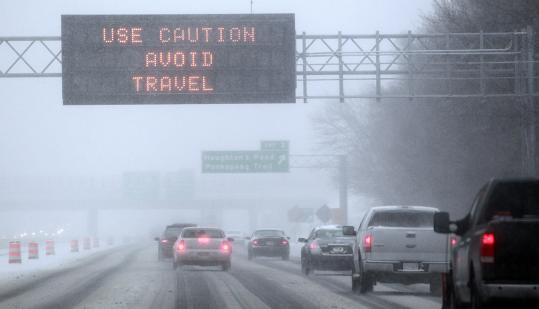 At midday yesterday, visibility on some sections of Route 128 had dropped dramatically. Forecasters predicted some areas would get 15 to 18 inches of snow. (Suzanne Kreiter/ Globe Staff)
By Scott Allen Globe Staff / December 27, 2010

A Christmas weekend nor’easter barreled into New England yesterday, paralyzing airports, roadways, and even train service as it buried southern New England under wind-driven snow and as flood waters lashed the coast.

Overnight, winds that reached 60 miles per hour knocked out electricity to nearly 60,000 customers in Southeastern Massachusetts, while police responded to countless spinouts, stall-outs, and other highway mishaps across the state.

All of Massachusetts remains under a state of emergency this morning and a blizzard warning for most of the state will remain in effect until 6 p.m. Governor Deval Patrick and Mayor Thomas M. Menino ordered all nonemergency state and city workers to stay home today. They requested that private employers follow their example.

“I can’t overstate enough how important it is for your safety, and also for our response efforts, for people to keep off the roads and indoors as much as possible,’’ said Patrick. “If you stay alert and follow common sense, we will get through this storm, as we have many, many winters before.’’

When the storm ends later today, large sections of Eastern and Central Massachusetts, as well as most of Rhode Island, are expected to be digging out from under 15 to 18 inches of heavy snow that will be hazardous to shovel and slow for plows to clear. Coastal communities from Newburyport to Provincetown were facing a powerful storm surge and potential flooding overnight.

Menino said the city was “ready to go’’ with poststorm cleanup, but he asked for help from employers and residents. And he warned residents that the city will ticket people who throw snow into plowed streets or don’t shovel their sidewalks.

Life across the region had ground to a near halt even before darkness fell, with snow coming down at a rate of 1 to 2 inches per hour. Amtrak suspended train service from Boston to Washington, D.C., while Rhode Island officials worried that conditions might be too harsh even for their snowplows.

“Conditions may be too severe, too dangerous to get the trucks out,’’ said Steve Kass, a spokesman for the Rhode Island Emergency Management Agency. “Anyone thinking they will wake up and [commute] to work on roads . . . that just isn’t going to happen.’’

By 10 p.m., gusting winds and heavy snow had knocked down power lines that serve 57,000 customers, including 45,000 customers of the utility . NStar spokesman Michael Durand said his company had hired private contractors to speed repair of the outages, which he said were concentrated on Cape Cod and the South Shore.

Meanwhile, a pickup truck hit two utility poles along Route 9 in Newton, knocking out power to homes and snarling eastbound traffic for hours.

However, Peter Judge, spokesman for the Massachusetts Emergency Management Agency, said he was encouraged that, as of 9:45 p.m., no cities or towns had requested state aid in setting up shelters or other emergency actions.

“It’s going to get worse before it gets better, weatherwise, so it’s encouraging that we haven’t had any requests [for aid] yet, and the number of outages is not astronomical,’’ said Judge.

“It’s just crazy. Crazy,’’ said Ray Peterson, manager of Scituate’s Village Market, who called in half his staff to deal with the crush wrought by the storm. “They’re buying everything that’s not nailed down.’’

Unlike the fizzled forecasts that have made skeptics of weather-watchers, National Weather Service meteorologists said that this storm seemed even stronger than projected, delivering blizzardlike conditions farther west than they had expected on Saturday, while dumping more snow than predicted for Cape Cod.

By 7 p.m., towns from Westport to Wayland had already received at least 6 inches of snow. Parts of Cape Cod were expected to get 8 inches of snow, twice the initial forecast. And the National Weather Service forecast that the storm would bring 16 inches of snow to Boston and similar totals to the Worcester and Springfield areas.

Though the first flakes of the storm reached Massachusetts early yesterday, Menino warned that the worst weather would come between 11 last night and 4 a.m. today, when high winds and heavy snowfall would create near-zero visibility, the definition of a blizzard. National Weather Service forecasters expect the storm to be over by noon.

The National Weather Service warned that the risk of coastal flooding would be particularly high overnight, when the storm’s winds would exacerbate the high tide around 3:30 a.m., probably pushing waves over seawalls. Meteorologist Alan Dunham said the fishing ports of Scituate and Gloucester faced the greatest flood risk.

The nor’easter, which gave the city of Atlanta its first white Christmas since 1882, rumbled north into New York and New Jersey, dropping 1 to 2 inches of snow per hour and forcing major airlines to cancel flights to New York City by 3 p.m.

At about the same time, a sea of anxious passengers filled the terminals at Logan International Airport, hoping to catch a flight out before the storm got too severe for planes to take off. Airlines were still checking passengers’ bags, but there were ominous signs all around: On the departure board in Terminal A, all of Delta’s flights after 4:27 p.m. were marked canceled.

Those who flew into Boston yesterday afternoon were also anxious, but for different reasons. Stephanie Shepherd, 17, of Medfield, gave relatives a huge hug after “quite a bit of turbulence’’ hit her plane as it flew in from Dallas.

In South Station, where all Amtrak service from Boston to Washington, D.C., was canceled after 5 p.m., would-be passengers who thought they could avoid Logan’s problems by taking the train were unhappily surprised.

Alexis Ostnioff was trying to get home to New York City after her flight out of Logan yesterday was canceled. She bought an Amtrak ticket for a train bound to Washington, but was left stranded with the cancellation of that train.

“I tried to get an earlier flight, but then I said ‘Oh, I’ll just take the train,’ ’’ the 30-year-old said. “I thought it would be the best shot.’’ Instead, she was left hoping that Amtrak service would be restored this morning.

By 6 p.m., MBTA train service was delayed by the growing storm; Red Line service from Alewife Station in Cambridge to Braintree was 25 to 30 minutes behind because of track-switching problems. But the T had caught up later in the evening.

Conditions on major highways steadily deteriorated through the afternoon. Eastbound traffic on the Massachusetts Turnpike had slowed to a crawl beginning at the Charlton rest stop near Interstate 84, with average speeds of 10 miles per hour. Drivers who disregarded Patrick’s warning to get off the roads by 3 p.m. reported similar slow-motion processions on Route 128 and other Greater Boston roads as wind-whipped snow, darkness, and slippery conditions made for white-knuckle driving.

“To have this happen on a Sunday during a holiday weekend is incredibly frustrating,’’ said Kate Lindquist, a New York City resident who was stranded in Boston after her bus ride home was canceled.

Not everyone was miserable as the blizzard descended. Children found a winter wonderland in the storm. Those who decided to stock up on supplies and ride out the storm from the comfort of home had a decidedly more positive attitude.

“I just want to get cozy,’’ said Steven Gross of Newton, as he loaded bags of firewood into his car outside the in West Roxbury. He and his wife were supposed to be heading to Puerto Rico today, but their flight was canceled.

“We’re not going, but we’ll have a nice vacation at home,’’ he added. “Sometimes life throws you curveballs. You have to make the most of it.’’