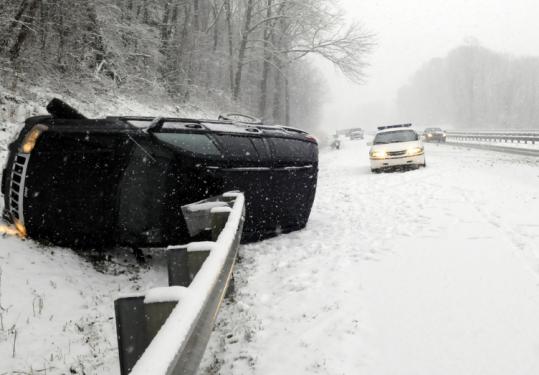 A sport utility vehicle landed in a ditch along Interstate 40 in North Carolina. Much of the state was under a storm warning. (Margaret Hester/ The Asheville Citizen-Times via Associated Press)
By Kristin M. Hall Associated Press / December 26, 2010

NASHVILLE — A rare white Christmas in parts of the South was complicating life for some travelers as airlines canceled hundreds of flights, while snow was predicted for the nation’s Capital and travel authorities warned of potentially dangerous roads.

The National Weather Service said the storm could bring 6 to 10 inches of snow to the Washington region, beginning today. The Weather Service was also forecasting possible snow today for the Boston and New York areas, with overnight temperatures in the 20s and wind gusts up to 30 miles per hour.

Brian Korty at the Weather Service in Camp Springs, Md., said travelers in the northern Mid-Atlantic region and New England may want to rethink travel plans for today. “They may see nearly impossible conditions to travel in,’’ he said.

In Pensacola, Fla., Jena Passut faced a quandary. The 36-year-old magazine writer drove with her husband and two kids from Fairfax, Va., to visit relatives. Now she worried about how to get back home amid the snow.

“I like a white Christmas as much as anyone, but I don’t want to drive in it,’’ she said.

The snowstorm blanketed sections of the Midwest and hampered motorists there on Christmas Eve, before dipping south late Friday. Winter weather advisories were in effect yesterday afternoon from western Tennessee to the Carolinas and from West Virginia to Alabama.

spokesman Kent Landers said 500 weather-related flight cancellations were planned for yesterday nationwide. That included 300 of the 800 scheduled departures from the Atlanta hub.

Only a few hundred people milled about the cavernous terminals at Hartsfield-Jackson Atlanta International Airport, many of them recent arrivals from international flights. Passengers were notified Friday when flights were preemptively canceled, so most didn’t bother to show up. Many chairs and restaurants were empty.

Snow didn’t begin falling in Atlanta until yesterday afternoon. “They canceled hundreds of flights and there hasn’t even been a drop of rain,’’ said Stephanie Palmer, who was killing time with her friend Ibrahima Soumano as he awaited a flight to Mali. “This doesn’t make sense.’’

Landers said Delta would decide on possible additional cancellations for today as the time approached. Landers said anyone with travel plans through Boston, New York, Baltimore, Washington, and Newark today or tomorrow can change their flight without a penalty as long as they travel by Dec. 29.

spokeswoman Judy Graham-Weaver said yesterday that the carrier had canceled seven flights and that afternoon flights from Atlanta would be delayed because of required deicing of planes. AirTran too offered to waive ticket-change fees for some flights scheduled for this weekend and tomorrow in the South and Mid-Atlantic.

The Nashville area had an inch or so of snow overnight, and roads appeared to be clear. There was also snow in northern Alabama.

By yesterday morning, 4 to 5 inches of snow had fallen over several hours in Bowling Green, Ky., according to the Weather Service. Louisville had about an inch.

Louisville last had snowfall on Christmas in 2002, when a half-inch fell.

Snow began falling about 8 a.m. yesterday in the North Carolina mountains, where up to 5 inches of accumulation was expected.

Discuss How are you preparing? MEMA advice
Your comment is subject to the rules of our Posting Policy
This comment may appear on your public profile. Public Profile FAQ