Few problems on roads, but man dies outside home 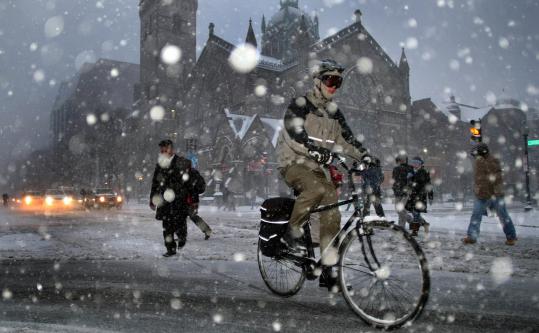 A bicyclist was among the people making their way across Copley Square in the late afternoon, with the Old South Church as the scenic backdrop. (John Tlumacki/Globe Staff)
By Michael Levenson Globe Staff / December 20, 2008
Text size – +

The dire drumbeat started early: Snow was on the way and it was going to be heavy. The region, still smarting from an intense storm last December that produced epic traffic jams, snapped to attention. The state dispatched 4,300 pieces of snow-removal equipment. The governor sent home all non-emergency workers. Major corporations sent employees home early. Districts canceled school before the first flake fell.

As snow fell in New England yesterday and last night, it seemed that the worst had been avoided. There was a largely effortless commute, few major accidents, and a palpable sense of relief. The storm, it turned out, dumped less snow than forecast and was more a source of wonderment and holiday delight than headaches and danger.

"Knock on wood, we don't have issue number one with this thing yet," said Peter Judge, a spokesman for the Massachusetts Emergency Management Agency.

"People seemed to peel out in an early enough timeframe," he said. "Hopefully, a lesson learned from last December."

Or, as 5-year-old Walker Oberg put it, after sledding down a hill on Boston Common yesterday: "It's awesome. I love snow."

Police did attribute one death to the storm. At about 8 p.m., an Acushnet man was trying to clear a partly downed tree limb outside his house with a chain saw when the limb fell, killing him. The man was identified as 44-year-old Leo Renauld, of Apple Blossom Lane, said Gregg Miliote, a spokesman for Bristol District Attorney Sam Sutter.

No other serious injuries were reported. The brunt of the storm left the area at about 10 p.m., and had left about 8.8 inches of snow by midnight in Boston, said Kim Buttrick, a meteorologist for the National Weather Service in Taunton. Continued flurries into this morning were expected to dump another inch or two, she said. Parts of Bristol County received more than 10 inches of snow, though total snowfall was less than expected.

Today will bring a small window of calm in a cloudy day with only periodic snow showers, she said, before the region gets hit with another storm tomorrow that is forecast to leave 1 to 3 inches of snow before turning to freezing rain by afternoon.

Many greeted the storm with stoicism, shrugging off the predictions of howling winds off the coast and 12 to 14 inches of snow as a mere nuisance or a chance to hunker down with some cocoa.

"If I can survive '78, I can survive anything," said Peter McNamara, a Dorchester resident who was at a Shaw's supermarket, stocking up on milk and cream, which he planned to churn into ice cream for a winter treat.

"The first one is always a joy," he said of the storm. "That's why I live in New England."

Trooper Thomas Murphy, a State Police spokesman, said that spinouts had been reported, as well as a jackknifed tractor-trailer on Route 2 in Erving, but that roads were being treated and traffic seemed less than usual. "I think a lot of people heeded the warnings," he said.

The exodus from offices started early. Governor Deval Patrick decided at 5 a.m. to let all non-emergency workers stay home for the day, and urged businesses to follow his lead.

Many did. , the Boston financial services company with nearly 14,000 employees in Massachusetts, let many "nonessential employees" leave at noon, while encouraging other staff members to work from home. Philips Healthcare, with about 3,000 workers in Massachusetts, shut its Andover headquarters at 1 p.m. , which makes scientific equipment, closed its Milford and Franklin sites at 1 p.m. and canceled its second and third shifts.

In Boston, the city's financial district was eerily quiet. Steve Steinberg said he had no problem finding a parking spot yesterday morning at the Post Office Square garage, which is normally packed.

"The spots were plentiful," said Steinberg, a spokesman for real estate firm . "It made for an easy trip in this morning."

Hardy souls strolled amid the snowflakes on the Common, soaking in a picturesque scene. A group of exchange students from Japan snapped pictures to remember their first snowfall.

"It completely sets the scene for a classic holiday season in Boston," said Asif Jilani, a 42-year-old Boston resident who was walking with his wife, Jennifer, and their 20-month-old son, Aleisander.

In Hull, traditionally hard hit by storms roaring off the ocean, residents hurried for cover by mid-afternoon as the slow-drifting snowfall turned into a wind-whipped flurry. There were numerous spinouts and a few fender-benders as snow made driving treacherous.

About 15,000 homes lost power in last night's storm, about 10,000 on Cape Cod, 4,000 on South Shore, and 1,000 in New Bedford, according to . National Grid reported scattered outages in the Brockton area. No customers were left without power from last Friday's ice storm, according to NStar.

Judge said people lost power yesterday in Southeastern Massachusetts because the snow there, wetter and heavier than in some other areas, brought down tree limbs and lines.

Weymouth resident Sarah Reynolds stopped by Nantasket Paint and Hardware to pick up salt and a shovel, on her way home from visiting friends.

"I've been putting it off until I forgot about it, but I guess better late than never," she said.

The storm was most burdensome for about 8,000 residents of Central and Western Massachusetts who were still without power after last week's crippling ice storm. Judge said that crews would work through the night and that the number of homes without power would drop by today.

Rebekah Henderson, 30, of Denver, who teaches English as a second language, was stranded at the airport last night, halfway through her trip to her brother's wedding tonight in Pittsburgh. Henderson wiped tears from underneath her black-rimmed glasses as she contemplated travel options, including a 12-hour, overnight bus trip or a noon flight tomorrow.

"I bought the flight although I couldn't afford it," she said. "But why pay $400 dollars for a [plane] ticket when you have to spend 12 hours on a bus."

Diana Grinwis and her boyfriend, Mark Strubler, both 22, learned that they would not make it home to Detroit to celebrate Grinwis's graduation from Northeastern at a family party tonight. Their flight had been canceled.

"We're just hoping tomorrow goes well; then we'll make it to the Christmas party on Sunday," Strubler said. "We love Logan," Grinwis said with more than a dollop of sarcasm.

For many, public transit was still the easiest means of travel. MBTA General Manager Daniel A. Grabauskas said Boston officials had asked him to do everything possible to keep trains going, so people could do Christmas shopping. And the T seemed to be running without significant delays.

Many of the workers who were out and about were performing essential duties. Inc. spokesman Phil Santoro said the company's crews were already working overtime making repairs from last week's ice storm and were bracing for more work this weekend. Santoro said Verizon had about 5,000 customers out of service before the yesterday's storm hit.

At Boston City Hall, Mayor Thomas M. Menino lingered into the evening in an eighth-floor storm hot line center. Operators there had fielded some 2,724 calls by 6 p.m. Officials in the center were testing a new mapping technology that allowed them to pinpoint the movements of the city's 600 snowplows and determine which streets remained unplowed.

"We haven't had any major difficulties as of yet," Menino said.

The mayor said that calling off school for the day and instituting parking bans early in the day helped ease plowing efforts and traffic. "People stayed at home," he said.

With several storms hitting within a few days, Menino said he wanted to make sure snow was removed properly so accumulation is kept to a minimum.

"We want to make sure during this first storm that we do it right," he said. "If it isn't done right, the roads get narrower and narrower, and it becomes more of a safety hazard."