Nearly 90% yet to be discovered, researchers say 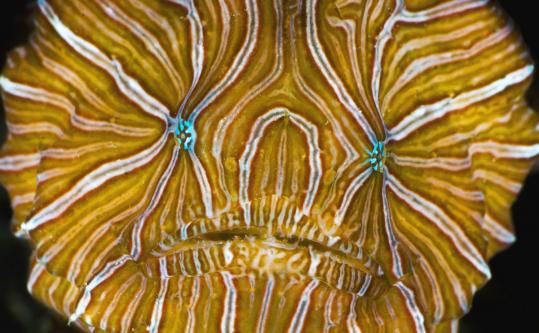 The Histiophyrne psychedelica was first described in 2009. Most species in untouched habitats have yet to be catalogued. (David Hall Seaphotos/Associated Press)
By Juliet Eilperin Washington Post / August 24, 2011

WASHINGTON - For centuries scientists have pondered a central question: How many species exist on earth? Now, a group of researchers has offered an answer: 8.7 million.

Although the number is still an estimate, it represents the most rigorous mathematical analysis yet of what we know - and do not know - about life on land and in the sea. The authors of the paper, published last evening by the scientific journal PLoS Biology, suggest 86 percent of all terrestrial species and 91 percent of all marine species have yet to be discovered, described, and catalogued.

The new analysis is significant not only because it gives more detail on a fundamental scientific mystery, but because it helps capture the complexity of a natural system that is in danger of losing species at an unprecedented rate.

Marine biologist Boris Worm of Canada’s Dalhousie University, one of the paper’s coauthors, compared the planet to a machine with 8.7 million parts, all of which perform a valuable function.

He noted that the International Union for Conservation of Nature produces the most sophisticated assessment of species on Earth, a third of which it estimates are in danger of extinction, but its survey monitors less than 1 percent of the world’s species.

For more than 250 years scientists have classified species according to a system established by Swedish scientist Carl Linnaeus, which orders forms of life in a pyramid of groupings that move from very broad - the animal kingdom - to specific species, such as the monarch butterfly.

Until now, estimates of the world’s species ranged from 3 million to 100 million. Five academics from Dalhousie University refined the number by compiling taxonomic data for roughly 1.2 million known species and identifying numerical patterns. They saw that within the best-known groups, such as mammals, there was a predictable ratio of species to broader categories. They applied these numerical patterns to all five major kingdoms of life, which excludes micro-organisms and virus types.

The researchers predicted there are about 7.77 million species of animals, 298,000 plants, 611,000 fungi, 36,400 protozoa, and 27,500 chromists (which include various algae and water molds). Only a fraction of these species have been identified yet, including just 7 percent of fungi and 12 percent of animals, compared with 72 percent of plants.

“The numbers are astounding,’’ said Jesse Ausubel, who is vice president of the Alfred P. Sloan Foundation and cofounder of the Census of Marine Life and the Encyclopedia of Life. “There are 2 .2 million ways of making a living in the ocean. There are half a million ways to be a mushroom. That’s amazing to me.’’

Angelika Brandt, a professor at the University of Hamburg’s Zoological Museum who discovered multiple species in Antarctica, called the paper “very significant,’’ adding that “they really try to find the gaps’’ in current scientific knowledge.

Brandt, who has uncovered crustaceans and other creatures buried in the sea floor during three expeditions to Antarctica, said the study’s estimate that 91 percent of marine species are still elusive matched her own experience of scientific discovery.

One of the reasons so many species have yet to be catalogued is that describing and cataloguing them in the scientific literature is a painstaking process, and there are a dwindling number of professional taxonomists.