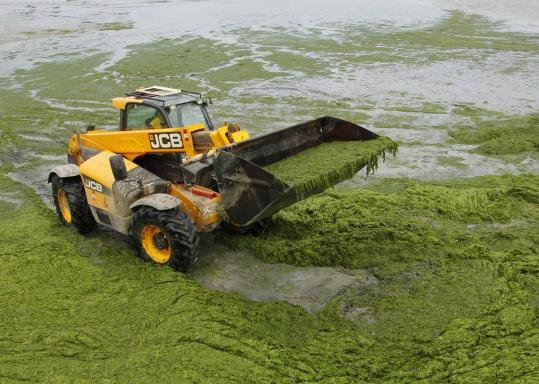 Beaches covered in algae are an annual occurrence in Brittany. The so-called “green tides’’ are attributed by scientists to animal waste and fertilizer runoff from the region’s farms. (Benoit Tessier/Reuters)
By Gregory Viscusi Bloomberg News / August 14, 2011

MORIEUX, France - The Chateau du Val hotel off France’s Brittany coast should be full this time of year. Instead, barely half of its 52 rooms and 28 rental properties are occupied.

Tourists are staying away after French media splashed photos of the nearby beach covered in rotting seaweed, fumes from which are blamed for the deaths of 36 wild boars in July.

“This affair is going to cost us a fortune,’’ said Joseph Herve, the 79-year-old owner of the three-star property just outside Morieux, on Brittany’s northern coast. “The economy was already difficult enough and now we have this. Overnight, almost all my German clients canceled.’’

Beaches covered in the green algae are an annual occurrence in France’s westernmost region. The issue pits Brittany’s $5.1 billion tourism industry against its $11.6 billion farming sector, whose large quantities of animal waste and use of fertilizers are blamed by scientists for feeding the so-called “green tides’’ in Brittany’s shallow bays.

French President Nicolas Sarkozy visited the Finistere region of Brittany on July 7, and said “it would be absurd to solely blame farmers, who have made enormous efforts.’’ He called the accusations “environmental fundamentalism.’’

The algae infestation became a national issue in 2009 when a horse died and its owner fell unconscious after breathing fumes at a beach about 50 miles west of Morieux. The wild boar deaths have once again drawn attention to the problem.

The first tests on six wild boars found July 24 showed that five had hydrogen sulfide gas in their lungs. The sixth didn’t, preventing the testers from concluding they had been killed from breathing fumes from rotting seaweed.

The region’s farmers and tourism professionals are angered by the media reports.

“It’s a complex issue, and to have televisions stations showing archive images and jumping to conclusions about what killed the boars has created a real mess,’’ said Jean-Pierre Briens, the mayor of Morieux, standing in front of a fence blocking access to the town’s beach. The beach is cleared of algae every day by tractors that collect it for compost.

The Sun published an article in England on July 28 warning British travelers about the risks. Philippe Pignard, who owns a hotel with a panoramic view of the beach where the horse died, says he now chases television crews away.

Tourist cancellations have so far been limited to affected areas, said Michael Dodds, head of the Brittany Tourist Board.

“We have 541 beaches in Brittany, and one is closed,’’ Dodds said. “We could have been facing a catastrophe, but so far we’ve seen few effects.’’

“We are paying the price of 30 years of intensive agriculture,’’ Dodds said. “It’s hard to change something that was encouraged by the state, and that helped turn what was a poor region into an agricultural powerhouse.’’