Most in GOP field would scale back stem cell funding 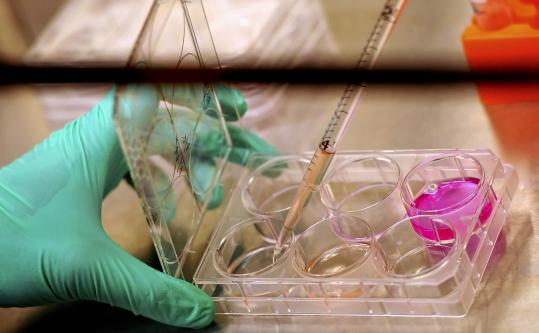 WASHINGTON - Nearly all of the Republican presidential candidates would put the brakes on President Obama’s efforts to broaden federal spending on embryonic stem cell research, a move many scientists feel would jeopardize the future of a promising but controversial field that has been whipsawed by political shifts over the past decade.

The prospect of an about-face in White House policy alarms researchers, who in 2009 hailed Obama’s executive order to lift Bush-era restrictions on taxpayer support for this type of work as the end of the scientific Dark Ages. Last month, a federal judge dismissed a legal challenge to government funding for the experimentation.

Human embryonic stem cells have the ability to become any tissue in the body and might eventually lead to treatments for intractable diseases such as Parkinson’s, Alzheimer’s, and diabetes.

But antiabortion GOP candidates equate the emerging science with abortion because human embryos must be destroyed to extract the stem cells. And like President George W. Bush, who in 2001 barred the National Institutes of Health from supporting most embryonic stem cell research, they vow to restrict future funding for it.

Scientists in Massachusetts, where private philanthropy has enabled Harvard University to craft a majority of the embryonic stem cell lines used in research around the world and where a stem cell center in Shrewsbury is a mainstay of Governor Deval Patrick’s $1 billion life-sciences initiative, are warily eyeing the Republican slate. Researchers are painfully aware that the future of their work is caught up in a political tussle that could cast the field into scientific limbo.

“While many of us in the field end up raising private philanthropy to do the work, it is very important that labs have access to NIH dollars so more research can actually be done,’’ said Dr. Leonard Zon, director of the stem cell program at Children’s Hospital and founding president of the International Society for Stem Cell Research.

Since 2009, the NIH has released more than $300 million for research on human embryonic stem cells, provided the cells are derived from donated embryos that would otherwise be discarded from fertility clinics.

The presidential order has expanded the number of stem cell lines that federally funded scientists could use to 128, compared to the 21 Bush made an exception for because they existed prior to his 2001 ban.

Bush’s compromise drew sharp criticism from some conservatives, who chastised him for allowing any federal support of the research. Now most of the Republican candidates have refused to be pinned down as to just how far they will go in their opposition.

Wary of alienating social conservatives who have become increasingly important to winning in 2012, their campaigns responded to a Globe survey of their positions with vague statements and dodged questions about whether they would endorse Bush’s position of allowing funding for research on a limited number of existing stem cell lines to continue.

Various antiabortion groups have tried to get candidates to take a firm stand. But the issue has become a political football, said Marjorie Dannenfelser, president of the Susan B. Anthony List, which endorses and raises money for antiabortion candidates.

The organization recently asked the presidential candidates to sign a pledge promising to end taxpayer-funded abortions and appoint only antiabortion judges, Cabinet members, and executive branch managers, including the head of the NIH.

Gingrich and former governor Jon Huntsman Jr. of Utah are the only candidates who told the Globe they would continue NIH funding for research using existing cell lines, but both said they would not expand federal dollars to include new cell lines.

Candidates’ hesitancy to spell out their detailed position on the issue has raised the ire of some antiabortion groups.

Former governor Mitt Romney of Massachusetts, whose stances on embryonic stem cell research and abortion have evolved over the years as he has increasingly cast himself as a social conservative, said he would not allow federal funds to support the research.

Asked whether Romney would make an exception for research being conducted on existing stem cell lines, a campaign spokesman responded, “We would make an examination of the science and speak with experts in the field.’’

While campaigning for governor in 2002, Romney had endorsed embryonic stem cell research and even said he would lobby Bush to embrace it. But he changed his position in 2005 when he vetoed a state stem cell bill that would have allowed research on human embryos created for scientific experimentation and not just ones left over from fertility procedures.

He said he came to the conclusion after examining the issue in depth by speaking with scientists, despite knowing that the research could lead to cures for diseases such as multiple sclerosis, which his wife has.

Running for president in 2007, Romney reinforced his opposition to embryonic stem cell research, even as his then-GOP rivals Senator John McCain and former mayor Rudy Giuliani of New York City endorsed the expansion of federal support for such research.

Bachmann voted in 2007 against expanding federal funding to embryonic stem cell research. In response to Obama’s 2009 executive order, she called the research unnecessary and immoral, saying “science does not require us to enter this brave new world.’’

Santorum compared a 2005 bill to enhance stem cell research to “the wholesale destruction of human life paid for by the federal government.’’

McCotter and Paul, too, have voted against bills that would have eased restrictions on embryonic stem cell research. And Pawlenty, who said in the first Republican presidential debate in May that he opposes embryonic stem cell research, had vetoed a 2008 Minnesota bill that would have authorized the University of Minnesota to spend millions on such research.

Candidates should be more clear about where they stand, said Jeffrey Botkin, a professor of pediatrics and medical ethics at the University of Utah who is chairman of an NIH committee that determines whether lines of embryonic stem cells that scientists want to study have been ethically derived.

“Candidates ought to have a considered opinion on the topic because there’s been so much debate about this issue over the last 10 years and we’ve seen two administrations that have had different ways of approaching this,’’ Botkin said.

According to Gallup’s 2011 values and beliefs poll, 62 percent of Americans feel embryonic stem cell research is morally acceptable. In 2009, a Pew Research Center poll found that 58 percent of the public supported federal funding for the research - with nearly twice as many Democrats as Republicans favoring it.

Representatives of various disease associations also continue to advocate for more federal funding for research on embryonic stem cells because of the life-saving potential such science holds.

“This particular technology offers a lot of potential for cure and better treatment for diabetes patients,’’ said Tamara Darsow, vice president for research programs at the American Diabetes Association. “It would be disappointing to take a step back.’’

Until the scientific community receives definitive guidance, researchers wait anxiously, forging ahead as well as they can.

“All this stopping and starting makes it very difficult for research projects to proceed,’’ said Michael Werner, a bioethics attorney in Washington and executive director of the Alliance for Regenerative Medicine. “Ultimately, it makes it harder for drug developers to turn this research into new therapies for patients.’’