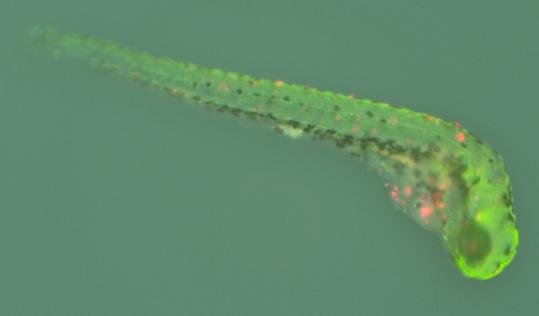 Every child learns that plants, from the simplest algae to majestic oaks, transform sunlight into energy. Now, Harvard researchers have taken a step toward building fish powered by sunlight, too.

The idea of endowing ordinary cells with the superpower of photosynthesis came about, like much scientific inspiration, outside the lab. Pamela Silver, a Harvard Medical School professor, was chatting in her kitchen with her husband and a friend when she was seized by an offbeat idea with more than a touch of sci-fi appeal.

What if it were possible to give lots of different kinds of cells the plantlike ability to plug into the sun? The possibilities were intriguing, from solar-powered fish to photosynthetic skin.

“Sunlight is our biggest untapped natural resource,’’ Silver said. “I have this more wacky vision. If you had a patch of [photosynthetic] skin, you could make skin and use it on burn victims, and maybe you could use the fact that it was light sensitive to promote its growth.’’

The next day, a gutsy graduate student, Christina Agapakis, volunteered to take on the project. She injected something called cyanobacteria, blue-green algae that turns sunlight into energy, into zebrafish embryos.

The scientists were not sure what to expect; after all, when they injected another bacterium into the embryos, the fish died.

This time it worked, the researchers announced yesterday in the journal PLoS ONE. The cyanobacteria set up shop in cells inside the fish and, fueled by sunlight, engaged in photosynthesis. They are still far from solar-powered fish, but scientists now have a model to understand a key question about the evolution of cells.