Federal court case may echo across US 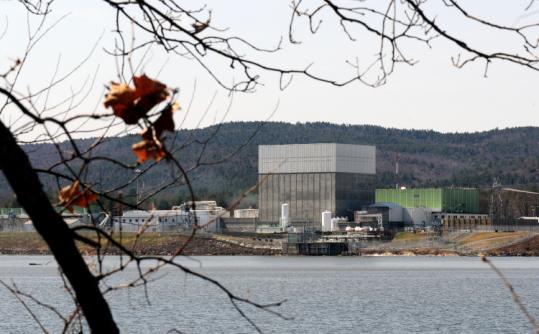 The Vermont Yankee decision is likely to have significance for some of the nation’s 103 other operating reactors. (Jason R. Henske/ Associated Press)
By Beth Daley Globe Staff / April 19, 2011

Owners of the Vermont Yankee nuclear power plant filed a federal lawsuit yesterday to prevent state lawmakers from shutting the plant down when its 40-year license expires next year.

The lawsuit, filed in US District Court in Burlington, Vt., is expected to force a legal showdown over whether state governments can claim a role in the oversight of nuclear power plants, which are regulated by the federal government. What the courts ultimately decide is likely to have significance for some of the nation’s 103 other operating reactors, especially those in states that have similar concerns about their safety.

If the Supreme Court were to reject Entergy’s suit, other states could be empowered to pass legislation, as Vermont did in 2006, granting lawmakers the authority to approve or deny a plant’s license extension, according to legal scholars. Vermont is the only state in the country that has such veto power, and last year the Senate voted overwhelmingly to shutter the plant in Vernon near the Massachusetts line.

“Despite the fact that Vermont Yankee is important to the reliability of the New England electric transmission grid, emits virtually no greenhouse gases, and provides more than $100 million in annual economic benefits to the state of Vermont, it has been made clear that state officials are singularly focused on shutting down the plant,’’ said Richard Smith, president of Entergy Wholesale Commodities. “That has left us with no other choice but to seek relief in the court system.’’

The move comes just weeks after the Nuclear Regulatory Commission granted Vermont Yankee approval to operate through March 2032 and in the midst of controversy about its age and design. The plant has the same basic design as the crippled Fukushima Daiichi nuclear facility in Japan that has had widespread radiation releases following a massive earthquake and tsunami there last month.

The Entergy lawsuit argues in large part that federal, not state, law governs licensing and operation of nuclear power plants, as well as radiological safety.

Vermont officials said they were legally justified in passing the 2006 law and argued that while the federal government oversees some portions of nuclear power plants, states also have a role to play. They contend the plant is too dangerous and old to continue operating and that Entergy did not object to the law that gave the Vermont House and Senate a final say in the plant’s future operation.

“Entergy’s lobbyists, executives, and lawyers all participated in that process,’’ Governor Peter Shumlin said. “Indeed, Entergy expressed its support of that law at the time. Entergy is now attempting to rewrite history, breaking its own promises and its own support of Vermont law.’’

When Entergy purchased Vermont Yankee in 2002, the company agreed it would seek approval for a license extension from the Vermont Public Service Board. In 2006, the Legislature took that a step further, requiring a second level of state approval.

Since then, Entergy has had several problems with the plant on the banks of the . In 2007, a cooling tower partially collapsed. The plant’s safety was not compromised, but the events stoked public concerns about the adequacy of plant maintenance.

Then last year, Entergy discovered elevated levels of tritium, a radioactive isotope of hydrogen, leaking from underground pipes that company officials initially said probably did not exist. Citing these events, the Senate voted 26 to 4 last year to close the plant next March when its license expires.

Legal scholars say the Vermont case could be important in defining state and federal oversight of nuclear issues. In a well known case in 1983, the US Supreme Court upheld California’s right to ban construction of new plants until nuclear waste issues were resolved. The ruling acknowledged that states had some rights in nuclear issues.

The Vermont Yankee case could address an even broader question of federal oversight.

“That is, does the federal government have complete power over nuclear issues,’’ said Boris N. Mamlyuk, who teaches administrative law at Ohio Northern University College of Law. Mamlyuk is researching the Vermont Yankee case. He says if federal courts uphold Vermont’s right to intercede, then “Nevada, California, and other states will probably renew efforts to curtail the operation of nuclear power plants.’’

The Nuclear Energy Institute, an industry group, declined comment on the suit. But spokesman Tom Kauffman said: “We do believe it is important for the public to know that Vermont Yankee operates safely and very reliably.’’

But Michael Dworkin, director of the Vermont Law School Institute for Energy and the Environment and former chairman of the Vermont Public Service Board, questioned why Entergy had waited five years to complain about the law.

“They are a little late out of the gate,’’ Dworkin said. “If Entergy believed [the law was wrong] they should have said it then.’’